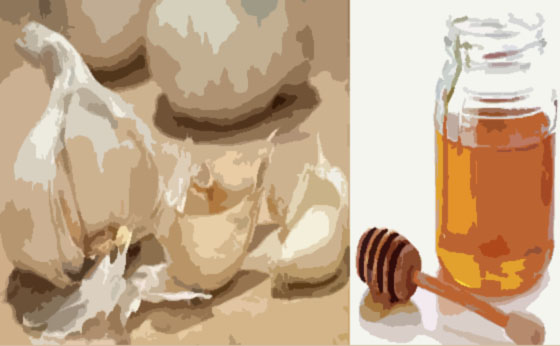 Having recently posted on the benefits of honey, I dug up an old post from a reader who had let us know how to make ‘garlic syrup’ (with honey) – a home remedy of sorts.

Here’s how to make garlic syrup:

My first batch was in 1978.
I have made it the same way for over Thirty years and it has not failed me.

I altered the original recipe from day one, replacing sugar with Honey. I believe this has made it even more potent, as honey also has antibiotic properties. It can actually kill some forms of bacteria.

From Forbes magazine, 02/02/2012, “Last year, some research was published evidencing some effectiveness against MRSA. Now a team from the Cardiff School of Health Sciences has demonstrated the effectiveness of this honey against Streptococcus pyogenes, an antibiotic resistant bacteria that often infects wounds and can prevent skin grafts from forming.”

The original recipe was from a book by Dr. Edward Shook where it was said that during WWII, the British government purchased the worlds Garlic crop, thousands of tons, and used it to treat the wounds of their soldiers on the front line. From the thousands treated, not one case of septic poison was produced. No Gangrene! That is to say, it is an antiseptic.

Those being External uses, I must say, I first made it to treat my family Internally.

For colds, coughs, pneumonia and possible exposure to tuberculosis. It has always been THE Lung Remedy in my home.

This does not necessarily soothe a cough and it does not mask a symptom, but rather goes after the cause. It can act as an expectorant. With a syrup made of organic garlic, clean local honey, organic apple cider vinegar, and pure water, one can treat a variety of conditions. I got up to the point that I used to make ten gallons at a time from twenty-five pounds of garlic.

It is not inexpensive, however, I feel it is more valuable than gold.

It is really, really, sticky to make, even before the honey is added. The garlic oil attaches to everything! And the entire house will reek on the day you grind the garlic. Or open the bucket later….Gotta Love It!

Break apart the garlic cloves. Remove loose peels, but don’t sweat the ones that cling.

Run them through a meat mincer/grinder. I use a hand crank one.

A blender might work, but that is all you will ever use it for. I have destroyed juicers, don’t go there. A garlic press is not enough. MINCE or GRIND the Garlic.

Add Equal amounts of water and vinegar. Enough to cover the garlic. Use a glass container preferably, or plastic if you have to, but Never metal to soak the garlic.

Dr. Shook only soaked his for four hours. I always soaked it, at the very least, over night. However I usually soaked it like a tincture and let it sit for two weeks. I have also left it in this state for over a year and it has not spoiled. I call this stage ‘Garlic broth’. (un-strained.)

The pulp is strained through layers of cheese cloth or linen or cotton and a sieve. The resulting product is the strained broth.

Always add 1 and 1/2 times as much honey as broth.

You actually get more liquid back because of the oil in the garlic that comes out.

Warm the honey on low heat and add it to the broth. Never heat the Garlic.

Externally:
Apply to lint, cotton, gauze, and place on wound.

I have also used this in cold environments to warm the body and blood. It used to be part of our wood gathering, chainsaw, tool box.

MSB Note: This is not medical advice.