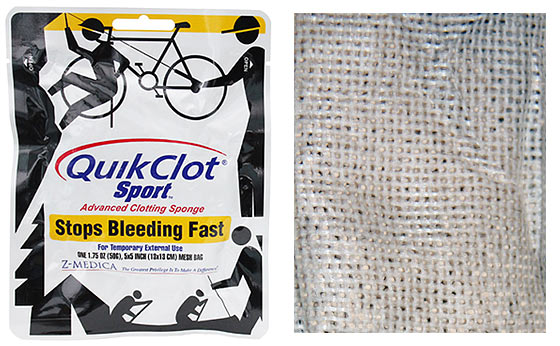 The first thing to know… Apply direct pressure on the dressing to help stop bleeding.

However a traumatic bleeding injury may require more help.

Most typical general purpose first aid kits will NOT include a clotting sponge. But that’s what you’ll need to stop major bleeding long enough to receive professional care.

Most first aid kits have an assortment of typical size bandages for cuts and scrapes. A few gauze bandages (perhaps 2×2″ and 4×4″). Gauze tape, and a few other supplies.

(UPDATE)
They now have Advanced Clotting Gauze in strips (recommended).

QuikClot stops moderate to severe bleeding until further medical help is available. This is why I have added it to my first aid kits.

Quikclot speeds coagulation of the blood, resulting in a clot that stops bleeding.

It stops bleeding quicker than conventional methods (up to 5 times faster). It is safe to leave on wounds until receiving more advanced medical help.

Quikclot is a natural enzyme that starts the blood clotting process in the body. Our bodies have small amounts of it that are there naturally (except for hemophiliacs), but Quikclot is simply concentrated to a high level.

It is impregnated with kaolin, the same technology used by US troops to stop even the worst bleeding wounds. Kaolin activates fibers in the blood plasma – makes them sticky, traps platelets and stops bleeding fast.

Plug it, Wrap it, Apply Pressure

Stop the bleeding. Plug it, Wrap it, Apply Pressure.

For traumatic bleeding, the plug is the QuikClot. This could be their square pad (sponge) or the gauze strip mentioned above (which conveniently wraps).

Then apply pressure to the wound area. The Israeli bandage does this automatically by it’s design.

[ Read: How To Use The Israeli Bandage ]

For most ordinary bleeding injuries, bandage/gauze and applying direct pressure to the wound site is adequate to control or stop the bleeding.

Applying pressure (ideally with a clean gauze or clean cloth over the wound) will slow or stop the bleeding. Coagulants in the body will clot the wound area naturally.