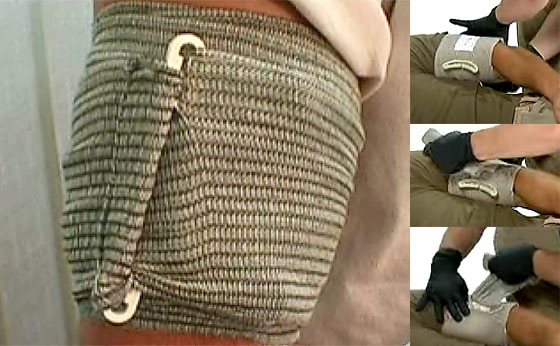 Keep an ‘ Israeli Bandage ‘ with your First Aid trauma kit. Why? To help stop traumatic bleeding. But you need to know how to use an Israeli Bandage! It’s not complicated… Video and written instructions below.

The device has a large sterile non-adherent pad surface to cover the wound. This pad is attached to (part of) a length of elasticized material (like an ‘ACE’ bandage).

It uniquely wraps to a hemorrhaging wound with a built-in pressure applicator.

The device can potentially save life between time of incident to urgent care.

About the Israeli Bandage:

The emergency bandage was developed in Israel in 1984 by Bernard Bar-Natan. He was in training to become a military medic. The design received government support (grant) during 1991. This eventually led to the first bandages being sold in 1998. Today the company produces 1.5 to 2 million bandages a year.

The United States and International military units use the Israeli Bandage. EMS, Industrial, and Hospital arenas use them. The emergency bandage is recommended for any environment which may risk traumatic injury.

Unique Features Of The Israeli Bandage

2. Pressure Applicator (a pressure bar) aligns over the wound to help stop the bleeding.

3. Closure Bar secures the bandage after it’s wrapped and to apply additional pressure.

Video How To Use The Israeli Bandage

Learn how to use it. Watch it being applied. I found a very informative YouTube video which shows the process and various uses.

Israeli Bandage INSTRUCTIONS How To Use It

1. Open the outer package by ripping open at any corner ‘notch’.

2. Remove the bandage from the clear inner-wrap by ripping its center ‘notch’.

4. Place bandage over wound with the ‘pressure applicator’ offset to the side of the wound.

5. Wrap one revolution of the elasticized fabric, then insert in/through the ‘pressure applicator’ and begin wrapping in the opposite direction – tightening as you go…

6. When fully wrapped, insert ends of the ‘closure bar’ into the wrapped fabric to hold in place.

Tip: A ‘ QuikClot ‘ sponge in conjunction with the Israeli Bandage is a great lifesaving combination when necessary.

[ Read: How To Stop The Bleeding With QuikClot 3 to 5 Times Faster ]