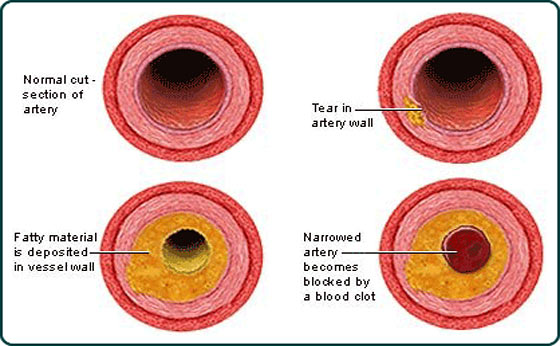 Cholesterol is a waxy, fat-like substance found in your body and in many foods. Your body needs cholesterol to function normally and makes all that you need.

However you can end up with too much cholesterol because of the foods you eat and the rate at which your body breaks down cholesterol.

Excess cholesterol can build up in your arteries. After a while, the deposits narrow your arteries, putting you at risk for heart disease and stroke.

Preparedness is not always about the end of the world. The ‘here and now’ of high cholesterol levels can affect your long-term survivability.

Here are several foods that you can eat to help lower ‘bad’ LDL cholesterol levels:

Consider eating a bowl of oatmeal every day. Oatmeal contains soluble fiber, which reduces the amount of cholesterol put into your bloodstream.

Oat bran in particular has been proven to reduce cholesterol levels and can be added to cereals or homemade breads.

Apparently half a clove of raw garlic a day can significantly reduce LDL cholesterol levels.

It can easily be added to salads, or tossed in with your favorite stir fry.

Not only does this food provide you with cholesterol lowering capabilities, but it also provides many other important nutrients, such as omega 3.

Flax seeds can be easily added to your cereal in the morning, or topped on salad as an oil.

Olive oil contains a powerful mix of antioxidants to lower your cholesterol.

Olive oil is high in calories so go easy on the amount.

A handful of nuts – about an ounce and a half – each day of walnuts and/or almonds will help keep blood vessels healthy.

Be careful though, as nuts are high in calories and could lead to weight gain.

The American Heart Association recommends you eat at least two servings of fatty fish per week.

These fish contain the most omega-3 fatty acids:

It makes sense, but the best way to lower cholesterol is to not eat foods that raise cholesterol levels.

Watch out for saturated fat – the white “marbling” in meat when it’s cold. Choose extra lean meats rather than fatty meats.

Drink low fat or skim milk instead of regular varieties.

Use olive oil instead of butter.

Make up the majority of the body’s cholesterol. It’s called “bad cholesterol” because high levels can lead to heart disease and stroke.

Called “good cholesterol” because high levels reduce the risk for heart disease and stroke. Scientists think that HDL absorbs bad cholesterol and carries it to the liver, which then flushes it from the body.

according to the CDC