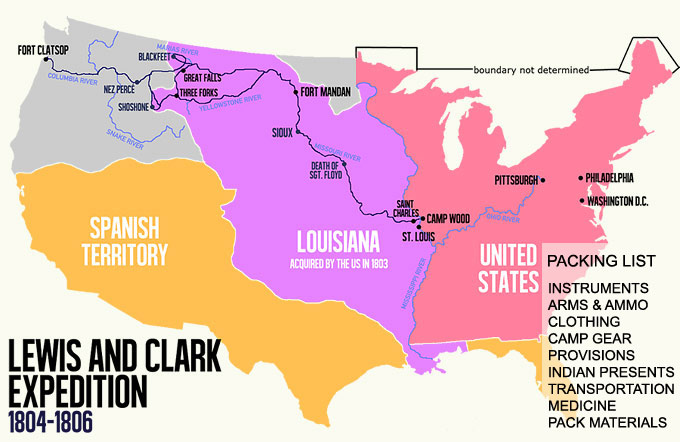 Being a preparedness site, I thought it might be interesting to look at the Lewis and Clark packing list. Maybe we can learn a thing or two from it?

Here is Meriwether Lewis’ packing list for his expedition (1804).

Provisions and Means of Subsistence

Materials for making up the Various Articles into portable Packs

From a preparedness standpoint, I enjoyed discovering the categories of what Lewis and Clark deemed important for their expedition.

MEDICINE
How interesting to look at this list before the days of modern medicine. This was ‘modern’ for its day…

MATERIALS FOR PACKS
You couldn’t go down to Cabellas and buy 30 backpacks. You had to make them yourself…

More about the expedition: (Wikipedia)

I re-posted the Lewis and Clark packing list above because I was reminded of it when a recent comment here in the blog (from “SpiritOf76”) brought up a related subject of the Oregon Trail…and what these pioneers brought with them.

Some interesting, even perhaps useful stats on the early settlers and pioneers on the Oregon Trail.

It typically took 4-5 months, while walking 15-20 miles per day. ( Roughly 1200 calories/day walking across the prairie.

They were more concerned about having enough food than “ stuff “. If they had to get rid of some “ stuff “ in order to make room for more food, then they did.

These food stuffs were supplemented with hunting and fishing.

They were often helped by, and traded with the Indians. At least until the buffalos started to disappear.

If you ever get out to the great west, check out the Immigrant Trail Interpretive Center outside Elko, NV on I-80.

Fascinating, to see those scant supplies and the kit they used to try and get across the great American Desert. ( If you look on Google earth, you can still see wagon ruts left by wagons in the desert soils).

They were some tough individuals.

Some absolutely tough individuals! And most, who were not small children or elderly adults, walked the trail because of a lack of room for them in the wagon due to the wagon being loaded.

Plus the hazards of the trail which included rattlesnakes, dysentery, animals and people lost to drowning when crossing a river, wagons breaking down ( they usually had some spare parts), not enough for the animals to eat, some froze to death because of getting stuck in the snow and ice in the mountains, etc.

Life long friendships were forged by them enduring the hardships together, and helping each other survive the Trail.

That’s what they were willing to endure for the American promise of FREEDOM and their own land.