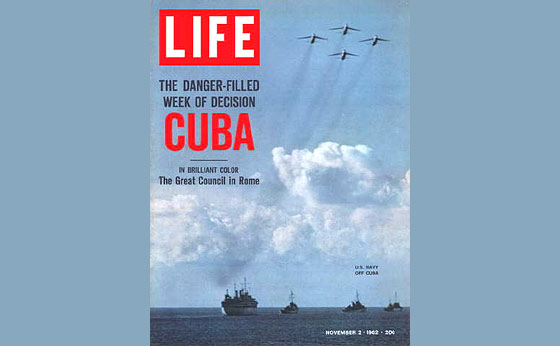 Robert McNamara, who was U.S. Secretary of Defense during the Cuban Missile Crisis, stated that “we came very close” to nuclear war, “closer than we knew at the time.”

How close were we? Terrifyingly close. If it were not for the non-action of this one submarine ‘second-in-command’ deputy commander, the world would have likely lost 100 million people.

Here’s the short story, and a caution to those who think you’re safe from nuclear war –

During the Cuban Missile Crisis of 1962, the deputy Commander (Vasili Arkhipov) on a nuclear-armed Soviet Foxtrot-class submarine B-59 near Cuba, refused an order to launch a nuclear-torpedo against the US aircraft carrier USS Randolph. If that torpedo would have been fired, it would have started World War III.

Following a failed CIA operation (the Bay of Pigs) to invade Cuba (to overthrow Fidel Castro’s Marxist government) and the subsequent installation (by the USSR) of 42 medium-ranged missiles and tactical nuclear weapons (discovered by US U-2 spy planes), the Cuban missile crisis erupted.

US forces went to DEFCON 2 — the highest readiness stage before all-out war. Six US Army and Marine divisions moved to South Florida and nearly 600 US warplanes were readied to attack – while nuclear weapons were loaded onto US B-47 and B-52 bombers. Seventy five percent of the Strategic Air Command’s bombers were airborne or poised to attack.

As Khrushchev sent Soviet ships steaming towards Cuba, president John Kennedy imposed a blockade on Cuba (naval and air) to stop further armament from the USSR.

The situation escalated further when a Soviet SA-2 anti-aircraft missile battery shot down a US U-2 over Cuba and a Soviet submarine was detected by US warships as it was heading for Cuba. What we later learned was that on the submarine, a firing order was given to launch a torpedo with a nuclear warhead at the USS Randolph – and apparently the launch was refused within 2 minutes of having to surface.

You see there had been no contact from Moscow (to the submarine) for a number of days once it had begun hiding from its U.S. Navy pursuers – it was too deep to monitor any radio traffic. Those on board did not know whether war had broken out. The ‘political’ captain of the submarine, Valentin Grigorievitch Savitsky, believing that a war might already have started, wanted to launch a nuclear torpedo. But he needed the additional agreement with deputy Commander Vasili Arkhipov. Arkhipov was against the launch and eventually won the argument. The submarine then surfaced and Khrushchev finally backed down.

We were very, very close. For more reasons than just this one…

For those of you who remember this time in our history, I would be very interested to hear your recounting of the situation back then. Apparently there was great fear that nuclear war was truly at our doorstep (which it was!). Curious about preparedness actions during that time…

What about the apparent and controversial (conspiratorial) agenda of ‘the global elite’ to reduce the world population back down to 500 million? (not saying I believe it – just saying…)