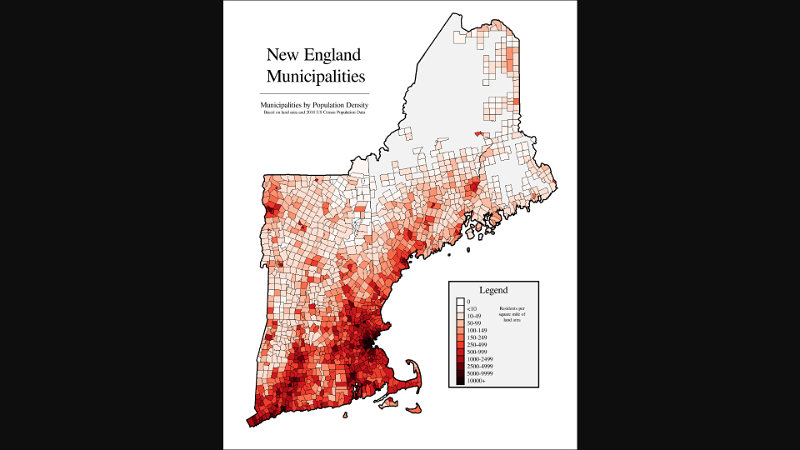 Looking to live in an area further away from elbow-to-elbow people? Well, there are lots of rural regions all over the United States. You don’t necessarily have to look west of the Mississippi River either. Yes, lots of people do live in the eastern US. Some areas are ridiculously population dense in this regard. But I want to briefly focus on New England population density. I grew up there. So I know a thing or two about it… Oh, and I’m currently living here in New England (northern NH). Though I grew up in Massachusetts.

New England is comprised of six states. These states are Maine, New Hampshire, Vermont, Massachusetts, Connecticut and Rhode Island. As of 2020, the region has a total population of 15,116,205.

The population density as a whole is nearly 235 people per square mile on average. Although averages don’t tell the whole story. In fact that statistic isn’t worth too much – because it depends on what part of New England you’re talking about. There are big differences (as most anywhere).

Let me get it started with an animated-gif map that I put together. It cycles through New England population density numbers based on county data. The color hues represent average number of people per square mile per county.

Although the following map is sourced from 2010 data, it’s likely very proportionally close to today’s data.

The most populous cities in New England

Whereas I also live in New England, my county in New Hampshire ranges from zero people per square mile, to about 17 averaged across the entire county. Looking at my own 1/4 mile square (about 30 acres), it looks like it’s just two of us – me, and Mrs.J (and our dog – oh, and usually several bears, 4 – 6 whitetail deer, the howling coyotes, fox, bobcat, dozens of turkeys, the wood chuck, the snow-shoe hares, red and gray squirrels and chipmunks, porcupines, skunks, raccoons, and… oh wait a minute — they don’t count on the census!). I only say this to point out the dramatic differences – depending where you live.

Here’s another way to look at New England population density. I put together a map that overlays the state boundaries (google earth) blended with a pretty interesting satellite image at night. The night lights of the populous regions puts perspective on population density versus geographical area.

Given survival and preparedness, southern New England is certainly a zone of risk should there be a SHTF breakdown of societal order. However it is interesting to overlay 200-mile diameter zones over the Boston and NYC region, a distance that some may consider to be the maximum typical ‘reach’ of negative influence during a societal collapse.

There are lots of rural low population regions in Vermont, New Hampshire, and Maine. In fact nearly all of those states are quite rural. On the other hand, Massachusetts, Connecticut, and Rhode Island are packed with people. While the majority of those states are shoulder to shoulder quaint New England towns, each with their charm, there are still lots and lots of people.

From a prepping and preparedness point of view, the northeast is not necessarily an ideal solution for insulation from risks during a SHTF societal collapse, when comparing to other choices within the entire country. While there are plenty of rural regions in central and northern New England with low population density, the growing season is short. The winters are cold and longer. Some of the terrain is rough and rugged. But you can make it work. Adapt and Overcome, right?

It is a beautiful place though, once you’re out of the city regions (unless you happen to like city living – which apparently many do. It’s just not for me). New England’s four seasons each bring their own unique beauty. Consequently the weather is always changing. We get it all here. I’ve been (almost) all over the country in my travels over the years. There are so many unique, beautiful, fantastic places in the United States.