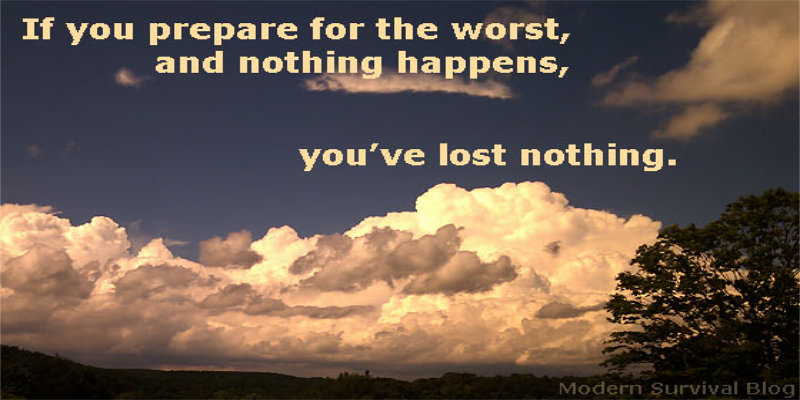 “If you don’t prepare, you could lose everything. If you prepare for the worst and nothing happens, you’ve lost nothing.” You might say that this is a prepper motto. An expression of the guiding principle, or the spirit of prepping and preparedness.

Given the uncertainties, dangers and risks in the world today, it just makes sense to prepare. It is common sense.

The prepper / preparedness movement has gained a-lot of traction over the years, and it has been happening for a reason. More people are ‘getting it’. They are becoming more aware of the many systemic problems and risks as an indebted, dependent, and densely populated society. Not to mention the national and global ‘political’ problems to muck it all up (putting it mildly).

“…if nothing happens, you’ve lost nothing.”

You might compare preparedness to an insurance policy, although with an important exception… Unlike conventional insurance policies where you pay cash into the plan, and then if nothing happens (e.g. you didn’t need it) you have nothing to show for it. However with prepping and preparedness, even if nothing happens, you will have lost nothing. How’s that? Well, you have procured tangible supplies and hard assets (and skills) which are yours, in your possession. Tangible. You can still use them…

It’s an insurance policy where you are paying premiums – to yourself!

The prepper, (the preparedness-minded) will not go blindly through their future as most sheeple being led by the nose, so to speak. Instead they will lead themselves. They will think for themselves, discovering the risks (some being systemic), and adapt solutions for them. Building a lifestyle that incorporates principles of the prepper motto.

The prepper, (the preparedness-minded), will take charge of their own future while preparing for its uncertain outcome. Committing the time to acquire extra food and supplies. The practical skills and common sense knowledge to be more self-reliant and self-sufficient to the extent possible or the extent desired.

Being prepared not only sets you up to survive, it provides tremendous peace of mind. For example I look at our food storage and feel safe and secure. I look at it all of the things I’ve done and learned which have helped me towards a degree of self-sufficiency and self-reliance. You can take it as far as you want to. Or anywhere in-between.

Just remember this:
By not preparing, you are preparing to fail.

[ Read: Preparedness is Peace of Mind ]