Protection from the damage caused by nuclear radiation is a concern of many preppers (and others) who are wary of the fallout resulting from a nuclear disaster.

A new research study at Georgetown University has proposed that a small molecule compound named DIM (diindolylmethane) is a cancer preventive agent that can be safely administered to humans in repeated doses as a medical countermeasure to prevent or mitigate acute radiation syndrome due to whole body exposure. 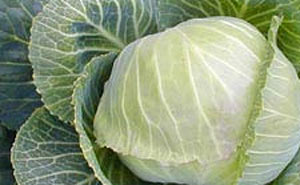 Sound too good to be true? Apparently lab tests on irradiated mice given lethal doses of radiation have proven successful. All of the untreated rats died but well over half of the DIM-treated animals were alive 30 days after the radiation exposure.

Rodents responded positively to treatment with DIM even when it was administered 24 hours after exposure – an important consideration, given that access to treatment might be delayed after a person has been exposed to radiation.

The researchers are looking into using DIM to “protect normal tissues in patients receiving radiation therapy for cancer” and to “mitigate radiation sickness in individuals accidentally exposed to radiation,”

DIM is found not just in cabbage but in all cruciferous vegetables, such as broccoli, Brussels sprouts, cauliflower and Swiss chard.

It is apparently unclear whether eating enough cabbage can itself provide similar benefits as the extracted DIM compound, but logic indicates that this may be yet another reason to eat your vegetables…

Cabbages thrive when planted with herbs such as dill, mints, rosemary, thyme, and chamomile. Cabbage also grows well with other vegetables and are good companions to onions, garlic, peas, celery, potatoes, broad beans, and beets.

Cabbage contains more vitamin C than oranges, as well as a large number of minerals, including iodine, sulfur, calcium, magnesium, and potassium. The outer leaves of cabbage contain more Vitamin E and calcium than the inner leaves.

Plant cabbage seeds ¼-½” deep. Transplant or thin small cabbage plants to 15-18” apart in rows 32-36” apart. Cabbage Transplants can be started in April for May planting. Transplant after 4-6 weeks. Use a starter fertilizer, soaking the root ball thoroughly prior to transplanting. Direct seed in late spring, as seedlings can tolerate a light frost. Cabbage can be direct seeded up until mid-late June for a continuous harvest. Ideal soil temperature for cabbage should be 21-26°C (70-80°F) for optimal germination in 4-7 days.

Cabbage prefers full sun, but will tolerate part shade. Prepare a rich, loose soil that holds moisture well and has a pH level of 6.0-6.5. Cabbage is a heavy feeder and will also benefit from applications of boron, calcium and magnesium, particularly during the early stages of growth. To help deter Cabbage worms, use row covers in the earlier part of the growing season – this will prevent moths from laying eggs on the plant. It also helps to manually remove cabbage worms if visible.

Cabbage Heads are ready when firm and when the interior is dense. Heads will split when over mature; rapid growth due to excess moisture and fertility will also cause splitting.