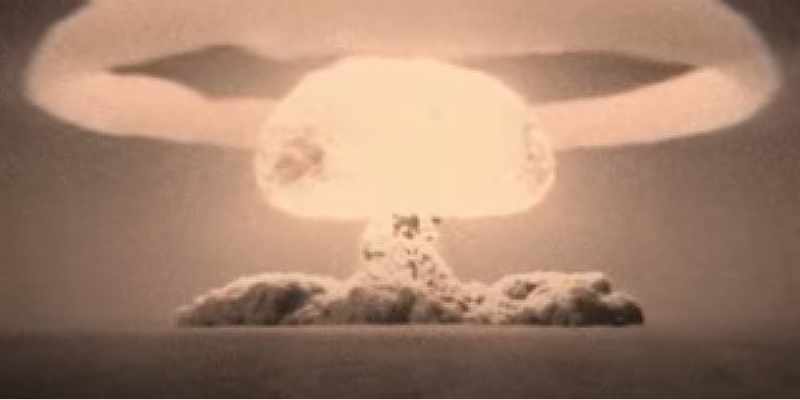 The Tsar Bomba footage. An amazing video of the largest thermonuclear weapon ever detonated.

(scroll down for original footage video)

About the Tsar Bomba

The Russian Tsar Bomba was the most powerful nuclear weapon detonation in the history of mankind.

It was October 30, 1961 over the Mityushikha Bay nuclear testing range, north of the Arctic Circle. The Tsar Bomba detonated 2 miles above the ground (~10,000 feet altitude).

At the time, the United States estimated the yield to be 57 Megatons. However, apparently since that time, all Russian sources have stated its yield as 50 Megatons.

During that period of time, Khrushchev, the First Secretary of the Communist Party of the Soviet Union, warned of the existence of a 100 megaton bomb during a speech to the Communist parliament.

The fireball was seen and felt almost 1,000 kilometers (620 miles) away from ground zero.

The heat from the explosion could have caused third-degree burns 100 km (62 miles away).

The mushroom cloud was 64 km (40 miles, or more than 200,000 feet) high. Nearly seven times higher than Mount Everest. It reached above the stratosphere and well inside the mesosphere.

The mushroom cloud cap had a peak width of 59 miles while the base of the cloud was 25 miles wide.

All buildings 34 miles from ground zero would be destroyed.

The explosion could be seen and felt in Finland. It broke windows there, and in Sweden. Additionally, in districts over 100 miles away from ground zero, wooden houses were destroyed. Stone houses lost their roofs, windows and doors.

Radio communications were interrupted for almost one hour.

One participant in the test saw a bright flash through dark goggles and felt the effects of a thermal pulse even at a distance of 170 miles.

There was an observation of a shock wave 430 miles away.

Windowpanes were partially broken to distances of 560 miles.

The seismic shock created by the detonation was measurable even on its third passage around the Earth. Its Richter magnitude was about 5.

The blast was equivalent to all of the explosives ever used in World War II — multiplied by ten.

The Tsar Bomba was the single most physically powerful device ever utilized throughout the history of humanity.

The following video is original footage of the detonation.

The ethereal music in the background is called: “Lux Aeterna” composed by György Ligeti.