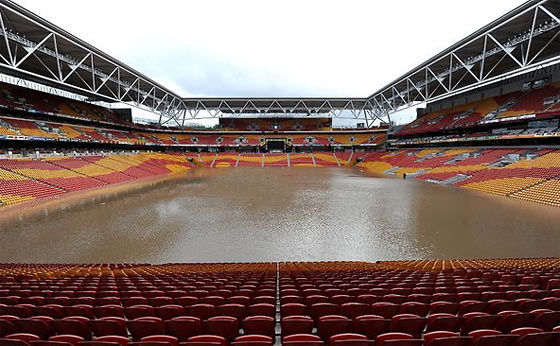 I’m drawing a parallel with that of a pandemic, just to give you an idea how fast an extremely contagious pandemic could be. Especially in today’s world of global and high speed travel, a worst-case pandemic may have the potential to somewhat approach the mind-numbing growth as in the example below.

That said, there are several very important factors which would impede the spread of pandemic compared to the example that I’m about to present. This includes natural immunity, vaccinations, and the R0 (pronounced “R naught”) contagion value of the disease. Among other factors. However as you may logically reason, it’s still potentially pretty scary…

The thing is – as you will see when you read this – most people will be caught off-guard, thinking that there’s no big problem…

The question is, if a single drop of water is added to the stadium, and then one minute later it doubles and two more drops are added, and then one minute after that it doubles again to 4 drops, and so on.. the water volume doubling in size every minute, how much time do you think you have to leave your seat and get out of the stadium before the water reaches your seat at the very top?

Think about it for a moment. It seems like you would have plenty of time to get out, right? Especially given that you can see it rising and could judge for yourself when to leave?

The first drop of water lands right in the middle of the field, at 1pm. Tick-Tock goes the clock…

You’ve been watching the water slowly filling the stadium grounds down there on the field.

45 minutes after the first drop, at 1:45 PM, the water is covering the field and lapping at the seats of the lower 1st-level rows. It doesn’t look terribly deep. Seems like plenty of time to get out if need be…

Shockingly, as you watch, the stadium goes from 93% empty to being half full, in just about 3 minutes!!

Holy S! You better get outta there!

But guess what? Too late…

In one more minute, the stadium goes from half full to completely 100% full and spilling over the top!

So, you sit and watch the single drop growing, doubling, and after 45 minutes all you see is the playing field covered with water. And then, within four more minutes, the water fills the whole stadium.

This means that you think you are safe because it seems that you have plenty of time left. Whereas due to the exponential growth you really have to take action much sooner if you want to have any chance of getting out of this situation!

Think about that. Let it sink in…

While a pandemic will not go entirely exponential as visualized in the example above (given some of the factors I mentioned above), the speed at which it could spread across the globe could be stunning. If it’s a killer pandemic with high transmission / contagion , it could become horrific, given our world’s present population and population density.

This is not meant to be frightful. Well, I suppose it is to an extent. Rather, I’m suggesting that “if” an extremely contagious and deadly pandemic were to spring up, it’s best to recognize it early.

Preparedness for a deadly pandemic is simple. Here’s what I mean… To avoid a pandemic outbreak, you need to avoid other people. Period. At least until it has burned itself out. That means enough supplies at home to endure the length of time until that happens.