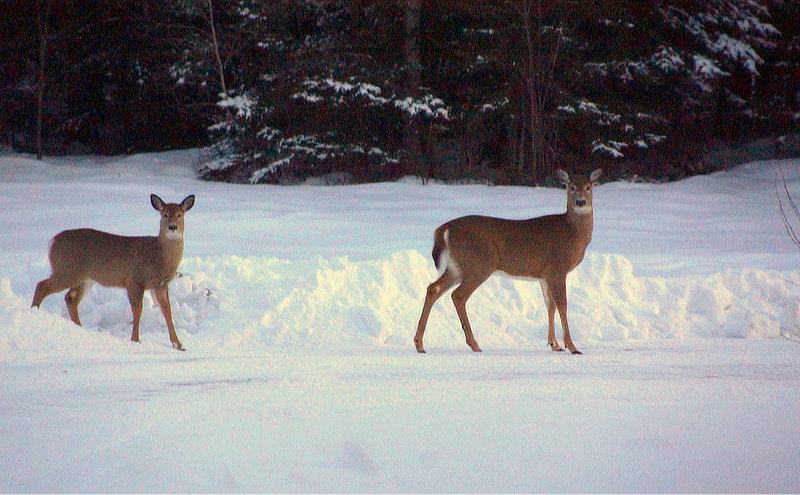 The one skill I have wanted to learn forever was field dressing a deer. Frankly, I’ve always thought anyone can shoot a deer (rifle of arrow), but then what? Knowing what to do, to at least get to a point to bring it to a processor is priceless. Even better is how to go beyond and process yourself. I’ve watched videos on it but I’ve never been able to actually go on a hunt and get my own experience. Some day..

Ken adds… There was a thread of conversation about the recent deer hunt over on the Open Forum that fits perfectly with Prepping Level 4. So I thought I would capture some of that information for a stand-alone post. Oh, by the way, Level 4 is about self-reliance and self-sustaining techniques. Self-sustainability to the extent possible.

A successful deer hunt. The butchering begins. Thankfully, I have two hand-crank winches to handle deer. Makes for much easier handling of the whole process. Weatherman says cold/cool enough to hang for a couple of days. Two deer are skinned and hanging outside. Both are high enough to foil scavengers. Butchering is truly a skill. I have respect for those who do this to make a living. We simply do it to provide meat throughout the year.

I’m always surprised by the number of folks who have never done anything like this. Gutting a deer in the field.
Skinning a deer. Cutting the meat from the bones, etc. etc. I encourage folks to participate and learn how to do some of these things. Maybe you have a neighbor/friend who hunts? Offer to help. Soon, you too will have respect for butchers. Though it’s a lot of work, we know what we have in the end.

We own a commercial grade small meat grinder. We buy clear plastic and freezer paper by the “industrial” sized rolls. For our family, it’s a routine part of deer hunting. Even the grandkids are involved with grinding/packaging. None of our family is “horrified” at getting a little blood on their hands. It’s normal. A yearly task. Joys of country livin.

Glad to report: This old man can still shoot. Not as good as I once was, but still pretty good.

I love to cut meat. If I can hang my deer up and keep them at 34F or less, I try for 7 days. Sniff them every day. If they ever start to smell like butter, butcher immediately! I was taught to completely de-bone all meat before freezing. Bone in contact with cut meat will make meat taste “gamey”. You are absolutely 1000% correct, everyone should watch or do it once, so they know what’s entailed. Making sausages after butchering is a kick too!

Best way to learn is to just drop a deer and get after it. There is a first time for everything. First deer I field dressed took me and hour. It takes me 10 minutes now. Point is, you can’t really screw it up too bad. Taking one of your “locals” might be tough the first time, but suggest you take the oldest one you see (it’s had a good life, and a quick death is better than one in the wild). So just go for it. If you have questions, just ask, we’ll help.

Just be careful to not poke any holes in the guts. I learned to take straps and quarters without fully skinning or any gutting. It’s way easier, keep it clean, no hair!

I like to hang the deer from the front legs and use a fixed blade knife to open it up from the bottom as the intestines fall out on the ground. Bacteria is more contained.

Once open, I split the ribs down the middle with a hatchet. Cut the organs free and remove some of the trachea. I then split the pelvic bone with the hatchet and clean up as needed. It’s easy after the first one.

Now a days I prefer to drag them to where I can use the game hoist on my truck and just swing them in when done. I call it the deer cranker-upper.

In my younger years, when I hunted for the freezer, I knew how to cook but I was still learning. As I grew older I became a much better cook. I learned about butchering from a man that ran a shop where I helped him refinish his floors at the new location. He also gave me an old chart of a cow and a pig showing where cuts come from.

Joy of Cooking has such charts in their book. Over time I noticed that many who loved to hunt were indifferent about cooking. I have always enjoyed the whole field to table experience. Joy of Cooking also has info about cooking venison and bear. Even feral pigs are different than grocery store pork in that the fat content in feral pigs is much lower because they spend a lot of time walking/trotting and running. Any recipe that deals with slow-cooking of lean tough meats will work on wild game.

We tagged out with three bucks for rifle. No bueno on archery. We process our own (one every other day) and came out with 190 lbs total in the freezer.

Good book on recipes is Buck, Buck, Moose by Hank Shaw. Still haven’t tried them all, but what I have tried is delicious. Also much to do with harvest, hanging and processing.

Never shoot a running deer as there is lactic acid and hormones built up in the meat which will taint it. Hanging like Minerjim noted for 7 days is also key. Once processed accordingly, cooking properly is the final step as the cuts are much leaner with less intramuscular fat, thus, method matters.

I agree that paying others to process deer is easier. As a preparedness item, I sincerely believe it’s an important skill. When ya do your own, you can remove ALL membranes and fat. In a deer those things taste awful. Professional processors, butchers, will not take the time and effort to do it right. They can’t, they would go broke. What we end up with is probably the best tasting venison.

In shtf there will be no professional processors. No health inspectors. We’ll all be left to deal with everything. In my opinion, learning and making a few mistakes now, is much better than not knowing how. Gutting a deer is not a pleasant task, but after you’ve done a bunch of deer, it doesn’t take long.

Like most everything in life, the more ya do it the better ya get. At this point, I wouldn’t allow anyone else to process deer for me. It’s a lot of work, but ya get better and better at doing it. We have developed our routine ways of cutting the meat from the bones. This allows easier removal of the membranes.

Even the very best venison steaks are mediocre. We don’t even cut steaks from deer. We make steak fingers from the back-strap and fry them with some batter. Yummy finger food. The rest is ground into burger using beef fat. Venison is very lean. It NEEDS fat, but not deer fat. Pork fat is very good too. Typically, we make significant packages of jerky meat, no fat at all. In the end, well worth the effort. Just my opinion.

Nobody has mentioned what I consider the tastiest part of the deer (my opinion)…and that is the “sweet meat”. Some hunters don’t even know what it is, or misconstrue the backstrap as being the sweet meat.

The “sweet meat” runs along the underside of the backbone, inside the ribcage, and is much smaller than the backstrap…but is melt in your mouth tender even when grilled over open flame…which I normally do when dressing a deer in camp. Leave it over the fire just long enough to brown the outside, then eat it straight off the grill like candy.

Met a lot of folks who never even paid attention to it before having it pointed out to them. You remove it much the same as you would the backstrap.

Confirmed by ‘Plainsmedic’ who said, “Dennis, Yep, we call ’em the inside tenders. The very best of the best for steak fingers. Best cooked soon and not frozen. The meat is striated and very tender. Harvest these soon after the kill. They dry out easily.”

‘Minerjim also said, “Around here we call that the tenderloin. Sweet Meat is an apt name. I usually cook that up when i am cutting and wrapping. Butter and chopped garlic and a pinch of salt. Yum! On our mule deer, it is about 1-1/2 to 2″ in diameter, pronghorn maybe an 1″, but elk they can go to about 3″ in diameter. (I forget how big they were on bison, but big) Best part of the animal, but i like it all.”

One last comment on butchering, Someone noted the best thing to do is: Jump in with both feet. Just start in. Yes, you’ll make a few unfortunate cuts, but it’s no big deal.

I/we have refined our methods over the years. Haven’t changed anything for 15 years or so. Must have it about right. I’ve been butchering deer and small game forever. Ya may as well learn now. In shtf everyone will be a butcher. Either that or go hungry. The more ya do it, the easier/better it is. Go for it!

Tip: Following the harvesting of meat livestock, a period of ‘hanging’ will improve the flavor and texture by giving natural enzymes time to break down tough muscle fibers. The temperature range for hanging harvested meat livestock is 33 to 40 degrees-F. Fresh meat and poultry will rapidly deteriorate in temperatures above 40-degrees-F, so be wary of this. Without a refrigerated room, hanging meat can only be done during the cold months of the year. Hanging times range from 24 to 48 hours, sometimes longer for a more tender meat.