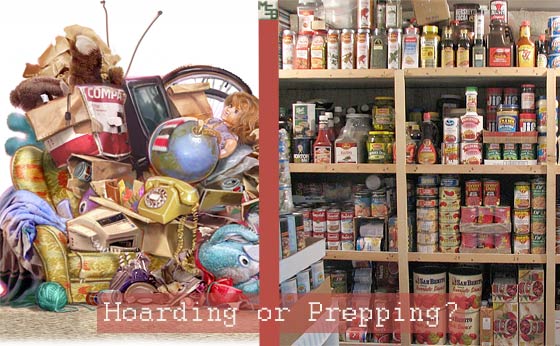 Here’s a line that might be typical from the mainstream: “Those crazy hoarding prepper’s!”

The action of building a deep inventory of consumables (among other practical items) by “prepper’s” is often entirely confused by the mainstream with the word, ‘hoarding’. People often believe that prepper and hoarder are synonymous. If someone has extra ‘stuff’ beyond what they consider ‘normal’, they must be a hoarder. Right?

A definition of hoarding:
Hoarding is the excessive and often compulsive collection of items, along with the inability to discard them. Hoarding often creates such cramped living conditions that homes may be filled to capacity, with only narrow pathways winding through stacks of clutter. A hoarder will buy or acquire things not necessarily associated with any practicality, rationale, or logical reason. It is a compulsive disorder.

A definition of prepping:
Prepping, in part, includes the acquisition of extra consumables and supplies that are stored for rotation and/or for future use, and is considered an insurance policy of sorts for maintaining a level of survival during a disruptive or disastrous period of time. A prepper is building supplies with a practical purpose.

A non-prepper may consider a prepper to be a hoarder if they walk into their house and see ‘extra stuff’ in plain sight. Because it seems out of the ordinary, they may presume the prepper to be a hoarder. In reality though, if they took a hard look at the prepper’s stuff, it will usually make sense – extra food storage and somewhat normal supplies. A hoarders stuff will often appear cluttered and irrelevant to everyday use or preparedness.

Another definition of someone who is hoarding may be someone who grabs as much of a particular supply (food, gas, water, whatever) DURING a period of shortage. A prepper, on the other hand, is someone who buys/acquires those supplies when there is NO shortage. Big difference – the prepper is not taking a limited supply item out of circulation at a time of others’ needs, whereas the hoarder is doing just that.

That all said, the big problem for prepper’s is that during a period of shortage/emergency, just the fact that they have a plentiful supply will automatically (in the minds of others) make them a hoarder. All the more reason to exercise as much OPSEC (operational security) as possible at all times, not just when there’s a problem. That “friend” you told about all of your food stores or (whatever else) may be the first to show up at your door for a handout (having not prepared him/herself), probably with lots of his/her loved ones, and will be the first to rat you out if you don’t share equally.