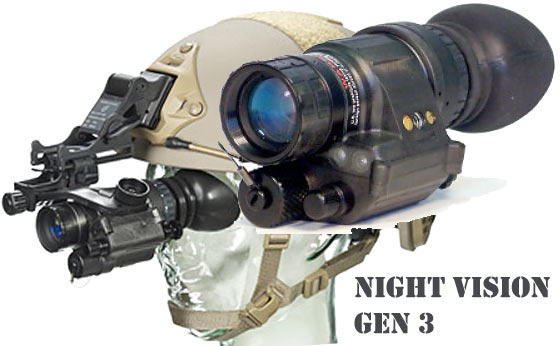 A night vision device can be an expensive investment. But it could prove itself invaluable under some circumstances.

Here’s information on how night vision devices work. The differences in technology of the various generations (GEN-0,1,2,3,..). And a recommended resource for getting your own NVD.

First though, are you researching where to purchase a night vision device? I highly recommend that you speak with Bob Griswold at Ready Made Resources (this is where I purchase). I love the PVS-14! More on that in a minute.

A lens captures ambient light (and some near-infrared light). The Image-intensifier tube (I2 technology) gathers and AMPLIFIES the light.

The image-intensifier tube has a photocathode. It converts the photons of light into electrons.

As the electrons pass through the tube, they are amplified by a factor of thousands.

At the end of the image-intensifier tube, the electrons hit a screen coated with phosphors. This provides the image and is viewable via another lens. These phosphors create the green image that has come to characterize night vision. Newer NVDs are now available with white phosphor (some advantages over green). I have one of those. Love it.

The AA-size or CR-123 type battery provide power for most most current night vision devices.

Night Vision Devices (NVDs) have been around for more than 40 years and are categorized by generation (GEN). Each substantial change in night vision device technology establishes a new generation.

GEN-0 The original night-vision system created by the United States Army. Used in World War II and the Korean War. These NVDs use active infrared as a light source.

An IR (Infrared) Illuminator is attached to the NVD. It projects out a beam of infrared light, similar to the beam of a normal flashlight. This infrared light is invisible to the naked eye. But this beam reflects off objects and bounces back to the lens of the NVD.

These original systems (tubes) use an ‘anode’ and a ‘cathode’ to accelerate the electrons. One problem with that approach is the acceleration of the electrons distorting the image and greatly decreasing tube life. There was another major problem with this technology… Hostile nations quickly duplicated it. This allowed enemy soldiers to use their own NVDs to see the infrared beam being projected by the device from “the other side”.

GEN-1 The next generation of NVDs moved away from ACTIVE infrared, using PASSIVE infrared instead. Once dubbed “Starlight” by the U.S. Army, these NVDs use ambient (infrared) light from the moon and stars. This enhanced the reflected infrared in the given environment.

A GEN-1 NVD did not require a source of projected infrared light. This also means that they do not work very well on cloudy or moonless nights. Generation-1 NVDs use the same image-intensifier tube technology as Generation 0, with both cathode and anode. So image distortion and short tube life are still a problem.

The biggest gain in Generation 2 is the ability to see in extremely low light conditions. A moonless night, for example. This increased sensitivity is due to the addition of a ‘microchannel’ plate to the image-intensifier tube. This plate actually increases the number of electrons instead of just accelerating the original electrons. Therefore the images are significantly less distorted and brighter than earlier-generation NVDs.

GEN-3 Currently used by the U.S. military. There are no major changes in the underlying technology from Generation 2. However these NVDs have even better RESOLUTION and SENSITIVITY.

The biggest GEN-3 change here is the photocathode composition. Gallium Arsenide. This is very efficient at converting photons to electrons, providing better resolution and sensitivity. Additionally, the micro-channel plate is coated with an ion barrier. This dramatically increases the life of the tube.

GEN-4 The military dropped the term, GEN 4. Instead, refers to the technology as GEN 3+ with “filmless” and “gated” (autogated) tubes. GEN3+ are currently used in the US Military, particularly by special operators. The technology shows significant overall improvement in both low- and high-level light environments.

The ion barrier that was added to the micro-channel plate in the previous generation was removed. This reduces the background noise and enhances the signal to noise ratio. Removing the ion film also allows more electrons to reach the amplification stage. The result are brighter images with significantly less distortion.

The addition of an automatic gated power supply system allows the photocathode voltage to switch on and off rapidly. This enables the NVD to respond to a fluctuation in lighting conditions in an instant (big difference!). My autogated PVS-14 performs very well because of it. This capability is a critical advance in NVD systems. It allows the NVD user to quickly move from high-light to low-light (or low-light to high-light) environments without any halting effects. For example, when bright light suddenly enters the field of view, the gated power feature eliminates a negative impact. The improved NVD will respond immediately to the lighting change.

Which is best for you?

Many of the “bargain” night-vision devices use GEN 0 or GEN 1 technology. These may be disappointing if you expect the sensitivity of the devices used by professional operators.

GEN 2, GEN 3 and GEN 3+ NVDs are increasingly expensive to purchase, but “you get what you pay for”.

The night vision device is designed in two basic packages; a monocular or a binocular. Naturally, a binocular NVD will cost lots more. But they do enable a depth of field which you can’t get from a single monocular.

Some monocular NVDs are rated to withstand the G-forces of a given rifle and can be attached to some platforms. Check the specs.

Where to buy night vision devices

A long time sponsor here is Bob Griswold over at Ready Made Resources. He particularly specializes in night vision devices. He is very knowledgeable in this area and has lots of real world operator experience.

You can check them out for yourself:
Night Vision and Thermal Optics

Contact him with any of your specific questions! He also welcomes anyone to stop by to check out his night vision devices at his walk-in store (Tennessee).