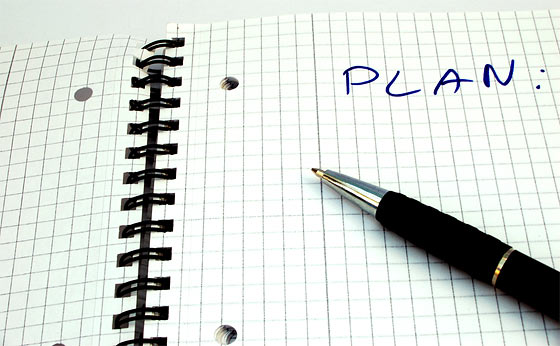 When the poo hits the fan, most people will be running around in circles ‘like chickens with their heads cut off’.

…and that is to make a plan, and to have a backup plan for that plan.

The most important thing to survival preparedness may be the planning itself. It’s something that many have not spent adequate time on. Know this though:

Any plan is better than no plan at all, and a plan that’s only in your mind is not as good as one that is written down.

When the SHTF (no matter the variety) there will be a high potential for stress, fear, panic, chaos, and ‘brain freeze’. Mistakes will be made and many will suffer from the ‘pucker factor’…

Referencing a preconceived set of plans and/or checklists will ensure better decision making and a superior chance of maneuvering through the ‘poop’.

Having said that, more often than not, your Plan A will turn into Plan B. Or even a Plan C.

It’s a good idea to include a ‘decision matrix’ in your plan. A decision matrix is one in which “if this happens, then do that”. The matrix accommodates the ability to adapt to varying circumstances.

While making preparedness plans, consider the ‘size’ or scope of the disaster you’re planning for. There are three primary considerations. Local, Regional, National (and/or Global).

When starting a plan, first consider the assumption (hypothesis, premise). Then work out a plan for it. After you’ve documented the plan, set it aside for awhile. Sleep on it. Later on come back to visit that plan and make adjustments with a fresh mindset.

Sometimes the assumption or premise to a given plan is only partially fulfilled when it actually occurs. Therefore you should have contingencies (what if’s) for a partial occurrence. We often consider the worst-case scenario, but many times the reality of occurrence is somewhere in-between.

None of us know what is going to happen. But we can make plans for what might happen. The majority of preparedness-minded people will do a decent job with thinking about ‘what if’ scenarios and the preps thereof, however most do not right down their plans (at least that’s what my instinct tells me).

When you put your thoughts and plans to paper, it makes a big difference. Try it sometime ;)

Lets hear your thoughts regarding ‘making a plan’… (plans – plural)