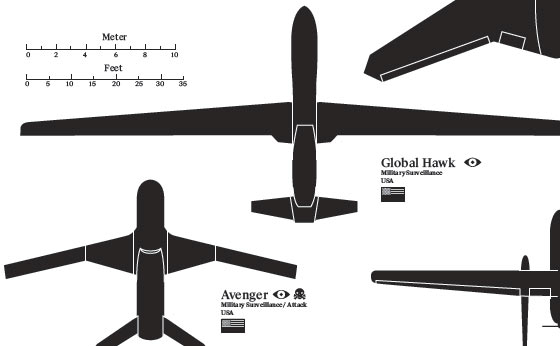 Drones are equipped with extremely powerful camera’s which can detect people and vehicles at an altitude of several miles. Most drones are equipped with night vision, and/or infrared vision camera’s, so-called FLIR sensors. These can see human heat signatures from far away, day or night. However there are ways to help hide from drones…

Regardless of the methods you might use to hide your heat signature from drones, be aware that in many instances you may be only reducing your thermal heat signature – perhaps enough to be ignored – but never assume it.

1. Day camouflage: Hide in the shadows of buildings or trees. Use thick forests as natural camouflage or use camouflage nets. Using netting over vehicles and camo patterns for other objects that confuse vision recognition systems. Currently the best such camo pattern is known as A-TACS.

2. Night camouflage: Hide inside buildings or under protection of trees or foliage. Do not use flashlights or vehicle spot lights, even at long distances. Drones can easily spot this during night missions.

3. Heat camouflage: Emergency blankets (so-called space blankets) made of Mylar can block infrared rays. Wearing a space blanket as a poncho at night will help hide some of your heat signature from infrared detection. Also in summer when the background temperature is between 96°F and 104°F, infrared camera’s have more difficulty distinguishing between body temperature (98.6) and it’s surroundings.

5. No wireless communication. Using mobile phones or GPS based communication will possibly compromise your location.

6. Spreading reflective pieces of glass or mirrored material on a car on a roof will confuse the drone’s camera.

7. Decoys. Use mannequins or human-sized dolls to mislead the drone’s reconnaissance.

How To Block IR-Infrared Thermal Imaging

Drones are remote controlled. The pilots operating the drone can be thousands of miles away at Ground Control stations. The control link is the satellite transmitted datalink by which the pilot controls the plane. By jamming or intercepting the datalink, one can interfere with the drones controls. The data link can be encrypted but often is not.

1. Interception. A sophisticated technique is using sky grabber software with a satellite dish and a TV tuner to intercept the drone’s frequencies. Communication from and to the drone can be intercepted.

2. Interference. By broadcasting on different frequencies or pack of frequencies the link between the drone pilot and the drone can be disconnected.

3. GPS spoofing. Small, portable GPS transmitters can send fake GPS signals and disrupt the Drones navigation systems. This can be used, for example, to steer drones into self-destruction flight paths or even hijack them and land them on a runway.

Our ancestors could spot natural predators from far by their silhouettes. Are we equally aware of the predators in the present-day? Drones are remote-controlled planes that can be used for anything from surveillance and deadly force, to rescue operations and scientific research. Most drones are used today by military powers for remote-controlled surveillance and attack, and their numbers are growing. The Federal Aviation Administration (FAA) predicted in 2012 that within 20 years there could be as many as 30.000 drones flying over U.S. Soil alone. As robotic birds will become commonplace in the near future, we should be prepared to identify them. This survival guide is an attempt to familiarise ourselves and future generations, with a changing technological environment.

This document contains the silhouettes of the most common drone species used today and in the near future. Each indicating nationality and whether they are used for surveillance only or for deadly force. All drones are drawn in scale for size indication. From the smallest consumer drones measuring less than 1 meter, up to the Global Hawk measuring 39,9 meter in length.

DISCLAIMER This is for information purposes only, with the intent of free distribution of publicly available information.