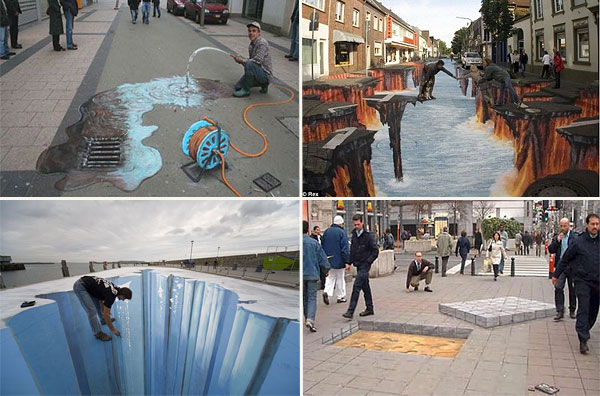 3D sidewalk camouflage is a stunning example of how easy it is to trick the human response based on what you ‘think’ you see. The images illustrated below are examples of how an artist can seemingly turn a flat street or sidewalk into a gaping abyss or nearly any other illusion that appears so real that you will step around it or avoid it altogether as your brain grapples with the confused conflict of what your eye is telling you versus what you know to be a flat surface.

There may come a time when survival may depend on your ability to remain unseen, or for certain things to go unnoticed. Perhaps your survival may not depend on it, but by being ‘out of sight – out of mind’ will minimize or eliminate any attention drawn to you or ‘it’. Blending in to the environment or background will help to achieve that.

There are many methods to achieve that goal, and will depend on what it is that you are trying to hide.

If it is ‘you’, then the question is are you trying to hide or are you trying to blend in with the rest. It’s sort of the same thing, but not really. Hiding is becoming invisible to the one who may be looking. Blending in may not be invisible, but simply appearing as ordinary and NOT out of the ordinary.

Becoming virtually invisible requires either being literally out of sight (putting something between you and the observer), or wearing some sort of camouflage that blends you into the background (tricking the eye of the observer).

The ‘Ghillie suit’ is one such method of camouflage and is a type of camouflage clothing designed to resemble foliage. Typically, it is a net or cloth garment covered in loose strips of burlap, cloth or twine, sometimes made to look like leaves and twigs, and optionally augmented with scraps of foliage from the area. Snipers and hunters may wear a ghillie suit to blend into their surroundings and conceal themselves from enemies or targets.

You could simply choose to wear one of the many varieties of camo clothing that’s widely available today. There are colors and patterns that are designed for different environments such as desert, urban, woodland, etc.

Remember that while you may be wearing camo clothing, your face will stand out without some sort of face paint.

A key (if not THE key) to remaining unseen, even if you are not camouflaged, is to remain still or to move slowly (exception being while moving within a crowd of others to blend in). The human eye/brain is extremely good at detecting movement in a normally still environment. Especially in low light conditions, if you simply remain still, you probably will remain unnoticed. This in combination with reasonable camo clothing, will virtually assure that you remain undetected (except for high-tech implements such as IR heat signature, etc.). Incidentally, wrapping yourself or covering your surrounding area in foil mylar (foil heat blanket) will block your heat signature – although will be an obvious visual giveaway during daylight.

Camouflage can be provided to objects by using camo netting material to cover them. The net could be of a similar color as the surroundings, and the mesh could be used to hold branches, leaves, twigs, or whatever else may be ‘normal’ for the environment.

Using the concept ‘out of sight – out of mind’, perhaps you want to further camouflage your home from the street to reduce the likelihood of passerby crime or burglary. Ideas include placing objects between the home and the lines of sight from the street. Plant shrubs or trees. Build a natural looking berm into the environment. A fence. It may be difficult to impossible, but adding nearly ‘anything’ between you and the observer will dilute the direct view to the object you are trying to obscure. An effective method may be to paint your home a more natural color that blends in with the surrounding environment. Take a look at what the observer can see… do you have a bright front door that stands out from the rest? You get the idea… if you want to have a low profile, then everything that is seen by the observer must be ‘normal’, or one with the environment.