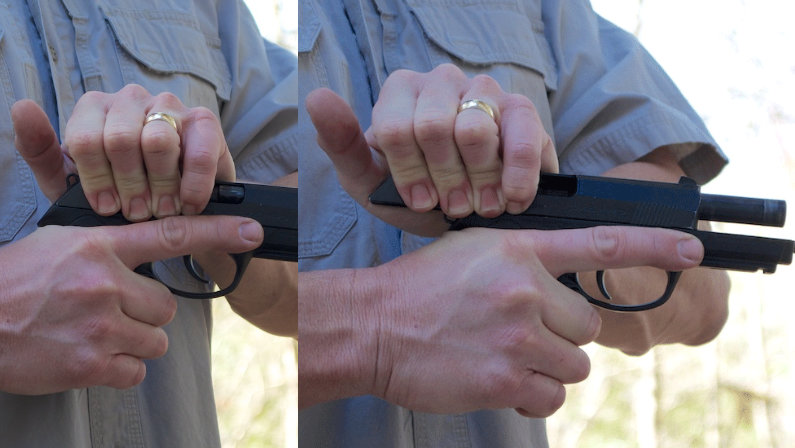 For some it is an accepted situation for ‘everyday concealed carry’ to use a semi-auto with an empty chamber.

If and when the time comes, the slide of the pistol will need to be racked to chamber a round.

The problem is this: criminal attacks will usually happen very quickly and unexpectedly. Often from close range.

The bad guy has the first move. Then it’s on you to realize it’s happening, and to react and overcome the attack. This may happen in seconds. And reaction time is crucial.

There may not be much time to draw a handgun and respond.

If there’s an empty chamber involved, there’s additional steps in the reaction process – and time to rack the pistol’s slide. And to do it under the duress of extreme stress and adrenaline.

Is an Empty Chamber a Safety Issue?

Those who carry with an empty chamber probably feel safer, and that’s why they do it.

The issue though is this: a gun will not shoot by itself. Ever. The issue is the handler.

Safe handling and carrying techniques are a must for anyone who carries a firearm.

The only time that a pistol will go ‘bang’ is when the trigger is pulled. If your finger isn’t in the trigger guard, the rest is simply safe handling.

Negligent Discharge – Do this and it Won’t Happen

Practice your draw (with an empty chamber – check it twice before you begin). Repetition over time until you are comfortable. Ideally you want this to be habit, without thinking about the steps in the process.

You should already know to never put your finger on the trigger until ready to fire (and you’ve identified the target and what is behind it).

If someone isn’t comfortable with everyday carry with a chambered round in a semi-auto, then maybe a double-action revolver is best in that case.


The defensive shooter should carry a handgun that he or she feels confident in and one that is ready to go when it clears the holster. Taking the time to rack a pistol slide in the middle of a gunfight is time that you simply can’t afford to be wasting in the first place.

What are your thoughts on this?