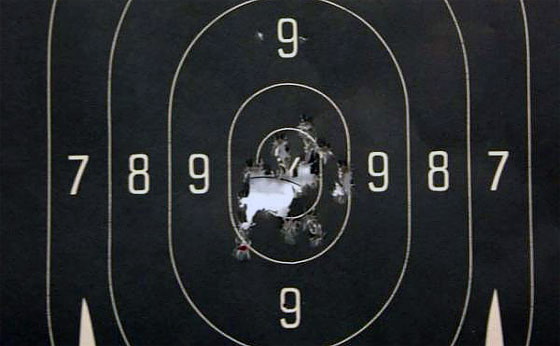 Effective self defense with a handgun involves reality based training and practice.

It needs to be practiced into ‘muscle memory’ to the extent that if and when the MOMENT arrives to use lethal force, that you will react swiftly and effectively to save your life or other innocent lives.

Here is the #1 myth about successful training for concealed carry:

Because I am effective at the range, shooting and hitting targets, I will be effective when shooting a violent attacker on the street.

Here’s the problem with that…

There is a big difference between accuracy while shooting a target on the range and accuracy while under the sudden stress of a violent encounter – a gunfight.

Because most people train the wrong way, it may be next to impossible to successfully stop a bad guy during an actual attack.

Here’s the wrong way to train for concealed-carry self-defense:

I’m not suggesting that practicing good target placement is the wrong thing to do, but what I am suggesting is that the typical plinking behavior at the range is NOT the best way to practice for real-world self-defense situations and will not lead to the right ‘muscle memory’ behavior during a real world attack.

Do you know why? Because during a real world violent, sudden attack and ‘gunfight’, the situation will be so very different that your traditional target practice training will be of little or no help. That’s because your body will be rushed, dumped and drenched with adrenaline – which will drastically affect (hinder) your advanced motor skills, and your performance.

You might not even be able to pull your gun out of its holster. You might freeze. Your hands might be shaking so badly that every single shot goes wildly astray.

So, how should you train for self defense?
When you receive a dose of adrenaline, your body’s actions will rely on muscle memory. You will be thrown to ‘autopilot’. If you do not have the right muscle memory, you will lose the fight. Muscle memory requires repetitive practice.

If your muscle memory is that of plinking targets at the range, this will NOT match the violent situation that you are now in…

Instead, you should practice for real-world self-defense. Here are a few ideas…

Note: Some of this may seem graphic and squeamish, but it needs to be said. The reason that you are carrying your handgun is for a last resort violent encounter – which itself is brutal and likely deadly. Do not ignore this reality. Train for it.

1. You must not count on the power of the handgun to drop an attacker with a single well placed shot. Statistically only 7% of single handgun shot wounds are fatal.

2. You must practice shooting highly concentrated rapid and accurate shots onto the attackers center mass.

3. In a real world violent gunfight you must shoot at center mass (only the head if you’re close enough) and CONTINUE FIRING until the attack is ended. Do not stop. The decision to engage has passed, and it’s now ‘you’ or ‘him’.

4. Your practice sessions should be concentrating on this rapid fire action. Your real world objective is to end the fight as quickly as possible.

5. When shooting rapid fire, your magazine will quickly empty. Have you practiced changing magazines while simulating an attack scenario – enough so that it has become muscle memory? While most attacks are over within seconds, it is vital to instill the muscle memory of changing out a magazine…

6. How many people practice drawing their handgun from its holster? VERY IMPORTANT part of muscle memory!

CONCLUSION
The point is this… training for a real world violent attack / gunfight is about ending the attack as quickly as possible. Once the decision has been made to use deadly force, your self defense NEEDS TO BE overwhelmingly violent to end the fight (with you still alive). Muscle memory will take over under the extreme stress of the moment (seconds) of engagement. If that muscle memory is ‘wrong’, then you might not come out alive…

There are all sorts of ways to train. But keeping it simple and practicing ALL of the ‘real world’ moves (draw, rapid fire to center mass, rapid magazine changes) will instill the ‘autopilot’ that might save your life.