Owning a gun, or a variety of guns, is not only your Constitutional right, but is a core element to ultimate personal protection and it compliments the lifestyle of ‘survival living’ as a practical tool.

Although there are some who are wary of guns, and there are parts of the world where gun ownership is outright banned, owning a gun is really just like owning a tool to compliment all the other tools that you have in your ‘kit’.

From ‘Kent’, a reader in Alaska, who already lives a lifestyle where hunting, fishing, gathering, gardening, canning, etc., is common and simply part of his and his wife’s current way of life. He brought up the notion of how firearms are integral to rural survival living and listed some practical recommendations including the four survival guns he would choose.

If I had to pick one firearm only, it would be a .22 rifle. Even a good one is inexpensive, as guns go, and so is the ammo. It is good for small game, adequate for home defense and medium game, and in a pinch one could take a deer or even a moose with a well-placed shot.

If I could pick a second, a 12-ga. shotgun (pump action) would be it. It can fire a variety of loads for small, medium, and large game – bird-shot to buckshot/slugs. It is the best home defense weapon there is.

Some might argue that the shotgun should be the first weapon and the .22 the second… but the .22 is more accurate at longer ranges and if your survival depended on taking that marmot way over there, I wouldn’t want a shotgun.

For a third, it’d be a tossup between a revolver and a scoped rifle. It would sort of matter on where one lived. In a rural area, the rifle would be handier for game like pig, deer, antelope, elk, etc. As far as general use, it is hard to go wrong with a .30-06 in the lower 48. Here in Alaska, with bigger more-dangerous game to deal with, a .338 or .375 would be the way to go.

In an urban environment, the revolver would probably be handier. A .357 magnum or .41 magnum is excellent for home defense. Don’t go for a little short-barreled pocket gun. Get a nice, solid, 6″-or-better-barreled pistol. With a scope, it can also be used for hunting.

While ‘big-and-bad’ semi-automatic weapons with large magazines may be popular in the movies, simple and reliable bolt or lever-action rifles, pump shotguns, and the ever-reliable revolver are far less likely to jam, misfire, or break.

Based on reading lots of opinion prior to posting this, it seemed to me that the following 4 guns were often near the top of the list with regards to tools for survival. 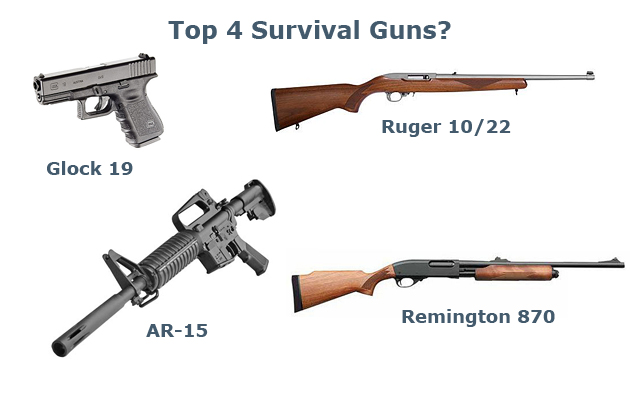 1. Glock 19 (9mm) handgun, Caliber is extremely common and ammunition will be easiest to obtain. Very reliable, accurate, and highly owned pistol for all around use.

I read this book a few years ago, Boston T. Party, and it suggests the following four guns (with caveats)

WHAT IS YOUR OPINION?