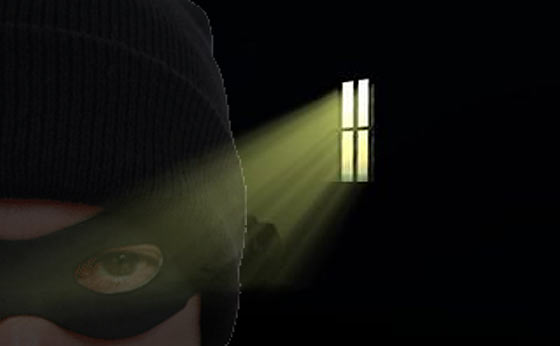 You never think it’s going to happen. You’re home alone. Intruders invade. You hide. You are forced to shoot to defend yourself…

Do you have the responsibility and training to properly react? Have you thought about it ahead of time? Are you trained and/or practiced to properly and safely use a firearm?

The parents left the home to go out for dinner, and the 16-year-old teenage boy staid at home, alone.

After a time, he heard the front door squeak. It was a split-level home and was in the other room when he heard the the door open and could hear every step as someone walked in the house. He wasn’t sure if it was his parents returning so he quietly walked over and looked… and noticed there were two of them. Intruders. He saw and heard them opening drawers – they were here to steal things.

I’ve got to get out of here. I can’t let them see me. I went downstairs, walking in the dark. I found the phone and dialed 911. I could only hear one set of footsteps and I was thinking, where is the other guy?

I realized I was paying too much attention to the dispatcher and not as much attention as I should have… to them – the intruders. I gave the 911-dispatcher the information what was going on, my address… and she asked how many are there? I realized that I really didn’t know…

I walked over to the gun closet that was nearby, got the key which was hidden, opened it, and the first thing sitting there waiting for me was the shotgun.

It really clicked in my mind that I am way out here in the sticks, no-one else is nearby and the police response was going to take longer than average – maybe 10-minutes.

The shotgun was already loaded because it was meant to be a defense gun for this very reason.

I cycled a round in the chamber and informed the 911-dispatcher that I had a shotgun. She told me to not use it and to go hide in the bathtub. Instantly – I thought that was not the right thing to do for me… to corner yourself in a very confined small space where if they do come in looking for you, you’re really trapped.

I told her no, I have a really clear view and I can see a reflection off the glass window at the bottom of the stairs where if they come down the stairs I will see them. I’m in the dark, and they were in the light, so I felt I was at a strong advantage.

One of them was coming down the stairs, and when he got to the landing halfway down, I could see the light behind him casting a shadow of his reflection on the wall. I realized that he is now literally 5-steps away from access to me. I have to stop this, right now…

The guy froze for a few seconds…surprised. He tried to hide himself up against the wall (I could clearly see his shadow). He wasn’t leaving.

I’m now getting more nervous, more anxious… It’s a standoff. Throughout my yelling, he came down another stair or two. He’s now about three steps from entering the room. I could see the shadow outline of his head, shoulder, and chest in the reflection of the glass.

I realized that he has no intention of leaving. He is there to hurt me… That would be the only reason he would not be leaving… he had a gun. I started to realize what would have to be done, that I would have to defend myself from this guy.

He rounded the corner very rapidly – a little sprint, a little jump… I started shooting.

I shot a couple of rounds off real fast. I was kind of disoriented from all the sound, the smoke, the gunpowder…

I was looking to see where he was, and I was expecting to see him laying there. He was not lying there. I did not hit him. I was wondering where is he at this point…?

The first thing I remember hearing was this noise – it was the 911-dispatcher coming from the phone – yelling, to see if she could get my attention to find out what’s going on. I picked up the phone and said I’m fine, I shot at him, I don’t know where they are. It was reassuring when she said the sheriff should be there momentarily. It was a huge relief to know that help was almost there.

She directed me to go to the window and look, and sure enough there were lights all over the place… She told me to close the door, put the weapon down and lie flat on the floor because they were going to have to come in and search the house assuming there was an armed robber.

I could hear them come into the house and shouting ‘Sheriffs department’, and there were a-lot of them. It was a huge relief.

This was a true story. It came from a short story video segment that I had watched, and I did my best to recount the details.

LESSONS LEARNED
Lock your door. When you’re home, at any time, you should lock your doors. You should have good, strong reinforced locks and doors. The standard doors that are built with homes today are generally not good enough.

He evaded initial confrontation by going downstairs. There he had moments to collect his thoughts and form a plan of action.

He armed himself for protection.

He then responded as appropriate and as necessary. He fired the shots as the lethal threat advanced on him. He missed the intruder, even after multiple shots with a shotgun (which implies more training is needed) but the shots were psychological in that the intruder fled rather than being intent on murder (which could have turned out differently). If you have a firearm in the home, you need to practice with it so that in a defensive situation when it matters most… you will hit your target. You need to get to the range. Don’t just leave it in your closet or safe…

After the incident, and knowing police were on the way, he stayed put to safely wait for them so he could identify himself rather than going out after them or clearing the house.