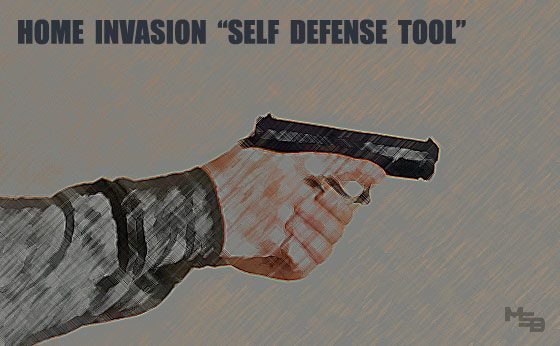 Home invasion happens. While there are geographical areas more prone to home invasion than others due to socioeconomic and other circumstances, no household is immune.

Home invasion could indeed happen anywhere. And you can be guaranteed that as we descend down further into the depths of economic turmoil, home invasion will become more wide spread as those who are desperate and those who make up the criminal element of society will assert themselves into your space – looking to ‘take what you got’…

We all know the sounds of our own house. The clicks, the creaks, the subtle noises, the appliances, – they all make their sounds under conditions that you have become accustomed to. Your subconscious hears these sounds while your brain goes through a series of ‘checks’ to determine that they’re ‘normal’. You tune it out, so to speak.

HOWEVER, it is remarkable (and a very good thing!) that when there’s something out of the ordinary, your subconscious alerts you that something’s not quite right. Even when you’re sleeping, your ears are still working. If there’s a ‘bump in the night’, your brain may awaken you from your dreaming because that sound did not pass the check list…

Before A Home Invasion

‘Tool’ Of Self Defense

First, preemptively, you should have in your house a tool of self defense, commonly known as a gun. Remember this: The police may be only minutes away but seconds count. Additionally, depending on where you live, police may be much more than minutes away! And under ‘collapse’ conditions, they may not be available at all…

The Location Of Your Gun Within The Home

Related Article: Have More Than One Handgun? Do This For Better Home Security

How To Store Your Gun

Depending on your family situation (kids in the house, just you, etc..) and depending on your own State laws, the way you keep/store your gun or guns may vary. That said, one recommendation is to keep a handgun in a easy-to-access lock box (one in your most common area and another by your bed).

I personally have three of the following pistol safe’s and have had them in operation for years with 100% reliability. The safe will open with a key, a button-press combination, and via biometric fingerprint (will store 2 prints – great for husband and wife). We always use the fingerprint method as it has been 100% reliable and fast.

When You First Hear That ‘Bump In The Night’

There are two trains of thought as to what to do first. This too (unfortunately) depends on what State you live in and their laws in this regard.

It’s a bit of a technicality which may become important in a court of law if you end up shooting, but with that said, perhaps there is no ‘safe’ way to evade/retreat/escape in your situation, so, ARM YOURSELF first.

If possible, it will be desirable to position yourself in a place that is or will be 90-degrees from the home invasion attacker. This will present the least likely position to be observed by the home invader while you will be in a position to take action first. Position or pre-position yourself 90-degrees from the attacker or from where the attacker will enter your space as he (she or ‘they’) proceeds.

Note: Escape If You Can

At this point in time, several variables come into play. If you have a spouse and/or kids, and depending on where the invader is right now, may alter what you do and the decisions that you make. If you’re alone, and if escape presents itself, it is logically wise to do so. Why risk your life for ‘stuff’ that the invader is after? Perhaps you can evade the situation even with kids in the house (herding them to wherever that evasion route may be). However if there’s no safe way out, then you must enter a strong defensive mindset.

If applicable (we’re not living in post-collapse SHTF yet), at this point I would dial 911. I’ve already positioned myself and taken measures to help secure my safety and survival (armed myself). Now it’s time to get the professionals on their way.

This is why it’s a good idea to keep your cell phone on your night stand, or a regular phone there…

When you call, the 911 operator is going to want to know a few things.
-What’s happening
-Where you are in the house
-Do you have a gun
-What you look like, what you’re wearing
-What the home invader looks like (if you can see)

Note: When the police get there, it is wise to NOT be holding a gun. At first they may not know who’s who, so be smart.

Deal With The Threat

The police are not there yet. Shout out to the attacker that you have a gun and command them to leave immediately. This may likely be all that you need to do.

HOWEVER! Note that this will immediately give away your location. If you are quite nearby (in the same room?) this may present a very bad situation in that if the home invasion attacker is ‘bold’, you may be fired upon. All situations are unique and home layouts, the attacker location, and your location will steer your actions to an extent.

‘Castle doctrine’ lays down that there is no duty to retreat from an intruder in one’s home. A justifiable homicide which occurs inside one’s home is distinct as a matter of law from castle doctrine’s no duty to retreat. With that said, as such, states with justifiable homicide provisions in pertaining to one’s domicile, do not in themselves authorize indiscriminate violence therein—the mere fact that one is trespassing is no defense per se to justifying homicide.

source: Does Your State Have A Castle Doctrine?

In Conclusion, There’s no ‘one size fits all’ here. I hope that I have you thinking about it, which really is Step #1. Put yourself in a hypothetical home invasion given your own home, your own ‘tools’ of self defense, and your own State Laws (you need to look this up).

“The world is a dangerous place. That’s why you’re prepared to protect yourself and your loved ones. Now arm yourself for the legal battle that happens after an attack. The first fight is for your life – the second for your liberty.”
The Law of Self Defense: The Indispensable Guide to the Armed Citizen