I then drew a 300 mile diameter zone circled around each city (150 mile radius).

I chose the 150 mile radius as a distance which in my estimation approximates the average ‘reach’ of those (average people) who may choose to leave, evacuate, or bug out from the city region due to SHTF collapse while in search of safety, shelter, food & water.

I am not defining ‘SHTF’ in this instance (the specifics of which would affect choices of those considering whether to stay or go).

Rather I’m suggesting that “if” a bug out decision were to be made, the majority of those who leave, on average, will probably get no further than about 150 miles. And this presumes that they’re in a vehicle. Traveling on foot is a whole different ball game.

Why 150 miles? I based it on the average range of a typical vehicle (mpg x fuel tank size) coupled with the likelihood that on average people may have 1/2 tank at any one time. I also made the assumption that no additional fuel will be available.

That said, many or most may not leave at all.
Even if they do, there will be ‘issues’

– most people will believe the government will save them
– they have nowhere to go and feel safe at home
– no plan for evacuation
– will not leave the cities while there’s still time
– no survival kit, no bug-out bag, no 72-hour kit, no plan, etc..
– only 1/2 tank of gas or less in their vehicle
– traffic jams will inhibit or block major routes
– don’t know alternate routes out
– road blocks may impede travel
– inability to walk very far without major survival issues
– poor health
– many people are badly out of physical shape; difficulty on foot
– not prepared to survive without food at the grocery stores
– most cannot build a fire, shelter, etc…
– people will have false notions about where they will go
– even those well equipped may face difficulty if they don’t leave first
– abandoned cars, roads blocked, ambushes, desperate scavengers, hostility
– many believe that ‘bugging out’ is an easy fix

Why did I build the map? What’s the significance?

The purpose of the map is to help identify regions which may be preferable for one’s ‘survival retreat’ security based on the potential ‘reach’ from the city regions in the event that there is indeed an exodus. Plus, I just like maps.

Note: I’ve included cities on the southern border of Canada which are populated greater than 100,000 since this may affect some of the northern states of the U.S. although it’s probably doubtful that Canadians will head south to the United States during collapse.

Note: There are regions within some of the 150 mile radius zones that will likely remain relatively secure due to a number of reasons, some of which are geographical.

Note: Within some of the zones there are natural obstacles such as mountains, forests, canyons, lakes, etc.. which present barriers even though relatively near population density.

Note: You might also visualize a 10 mile wide corridor along every main road and highway within your region of interest. Beyond that corridor will certainly be ‘safer’ from an exodus.

Note: Although looking at the eastern half of the U.S. on the map looks like there are very few safe places, actually there are numerous small communities scattered between those 100,000+ population centers that could easily function as safe havens.

Note: I may have overlooked a city or two greater than 100K (although I believe I’ve got them all) and there are those between 50-100K which are also considerations. This is just to give you an overview.

WILL THERE REALLY BE A ‘GOLDEN HORDE’ ZOMBIE EXODUS?

It is my general opinion that “if” there were a terrible societal collapse and that of collapsing infrastructure or other catastrophic events, there may be fewer on the exodus than the general opinion within the prepper community.

Most of the population will convince themselves that .gov will adequately help and assist or that the ‘event’ will fix itself and things will go back to normal (normalcy bias).

Many or most will probably stay put (some of the reasons listed above). And when things get real bad, it will be too late for most. They will be weak from hunger and thirst, and the conditions out on the roads may become impassible and dangerous.

THE MAP
So in theory, a bug out location (or one’s own home or retreat) will likely be less affected by a major SHTF exodus if in a region outside the overlapping circles or as few as possible. Yes, there are quite a number of logical exceptions, a few of which I just mentioned. It’s simply food for thought.

I originally built this map a number of years ago.
I’m re-posting it for your potential interest and comment. 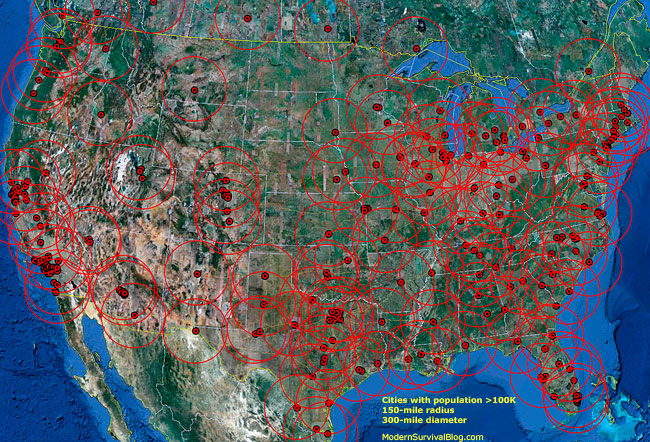 Related: Plan Your Evacuation Route Away From Nuclear Power Plants