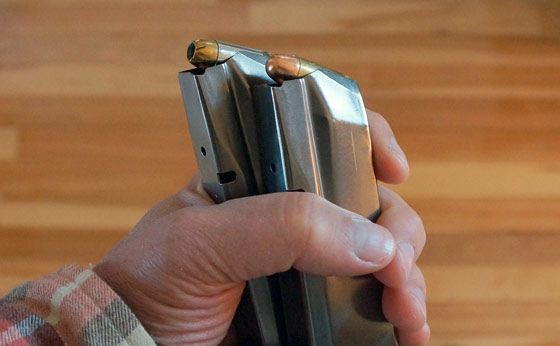 
IF your magazine is of reputable quality (e.g. from the firearm manufacturer or a source that you trust), this will presume that the SPRING inside the magazine will be of proper design specification for it’s intended purpose (to hold ‘X’ number of rounds of ammo) and will be of proper manufacture.

When a magazine’s internal spring is forcibly compressed (by inserting rounds of ammunition), it could in theory remain in this condition for countless years and will return to it’s original shape when the force is removed (expelled ammunition).

This is called “elastic deformation” – which is the action of the spring “deforming” while under force, but only temporarily, because it will return to it’s original shape when the force is removed. This deformation is temporary due to the specifications and design of the spring.

Translation: The more times a spring is loaded and then released (over and over and over), the more likely that tiny fractures may develop within the metal of the spring. Depending on the metal material itself, and how close to the ‘elastic limit’ that the spring is repeatedly ‘deformed’, it may literally require thousands, millions, etc.. of elastic deformations before this might occur. This is called metal fatigue.

Metal fatigue will increasingly permanently deform the spring and eventually may fracture all together.

IF you have a quality magazine (spring) that is designed for it’s intended use (“elastic deformation”) up to “X” number of rounds spring compression — the spring will always return to it’s original shape (and therefore no issues of ‘feeding’ rounds via the spring itself), no matter how long you leave the magazine fully loaded.

Having said that, if the spring becomes damaged – rusty, all bets are off.

In theory, the more you use a given magazine (spring), the more likely that spring fatigue will set in over time. However a well designed spring could last “forever” without any noticeable fatigue, given that it’s upper limit of elastic deformation should be well away (hopefully) from the designed force that the spring will ever experience.

Will loading one less round into the magazine extend the life of it’s spring while using it over and over again this way? I would say yes, IF that spring was designed such that it’s full compression is close to the limit of “elastic deformation”. I would also suppose that a magazine purchased from the firearm manufacturer would be of sufficient design to be able to fully load said magazine without having any issue whatsoever over time.

It comes down to quality and how these springs are made (their design and manufacture parameters). While manufacturers (in general) continue to cheapen their products to improve margins, it is unclear whether or not this is affecting certain firearms products and/or their accessories – including magazines and springs. Just buy ‘quality’ and be done with it.