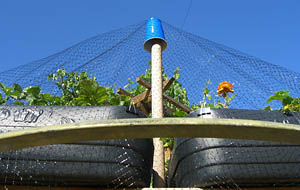 Last year I battled with the birds over my two little strawberry patches, each measuring about 3×3 feet – but stuffed full of strawberries. Last year my biggest bird problem was with the Mockingbird and the Robin. This year we are battling with the Blue Jay.

What they do of course is the moment that the berries begin to turn red, their built-in birdar (their version of radar) zeroes in on the delicious color and they begin to pick and devour at the strawberries.

(I have a similar problem with my Merlot grape vines which span across about 100 feet of trellis across some of the back perimeter of the yard. The very time when the grapes begin to turn blue, the attacks begin.)

Today I have decided to get much more serious about the perimeter security of our two precious strawberry patches. No, I didn’t load up one of the firearms… Instead, I made a trip down to ‘OSH’ Orchard Supply Hardware and went through the arsenal of bird deterrent technologies ranging from fake bobble-head birds-of-prey to flashy aluminum shiny ribbon. Since I already have the bobble-head birds-of-prey and a bobble-head owl which I normally reserve for grape season (so they don’t get too used to it), I decided to go with a protective bird netting.

Having just completed the strawberry patch fortress, I now know that unless you are a net fisherman, you will probably have a bit of frustration while dealing with a net. Nets are magnets for getting stuck on every little thing imaginable, not to mention the fact that you can hardly see it when you’re working on it or cutting it (at least it was true for this one).

The nets come in fairly large rolls. This one (the smallest I could find) was 14 feet by 45 feet (about $25 – ouch). I only needed to cut a square of about 10×10 feet, but I’m sure I’ll use the excess as I continue the bird battle down the road with other yummy treats.

For those that are going to attempt to build a preventative bird net, be aware that it is best to support the net in some way such that the net is not directly on the fruit itself. It’s Okay to lay the net over things like grape vines and such – because the fruit is suspended underneath and the birds can’t get it. Strawberries however are just lying there and the birds could just sit on the net and pick away…

Also be aware that birds will apparently try to get underneath and walk their way in to the feast – little sneaky buggers… So be sure to do your best to seal off means of entry.

Be creative and just work with what you have. Everyone’s little patch of goodies are different and the netting structure will have to be custom applied for effectiveness.

Since I’ve just now completed the strawberry patch bird net, I cannot yet report on it’s overall effectiveness. I will update with first hand results, as the patch is within my direct view of the office bay window. Maybe I’ll be able to catch a photo of a frustrated Blue Jay, and declare VICTORY!

On the other hand, I have a feeling this battle may continue… ;) 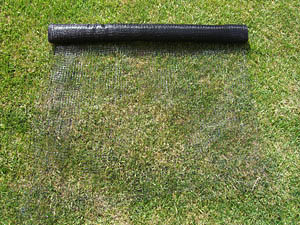 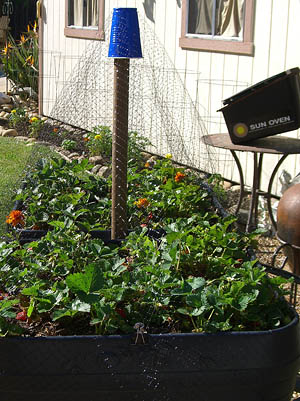 Update (the next day) 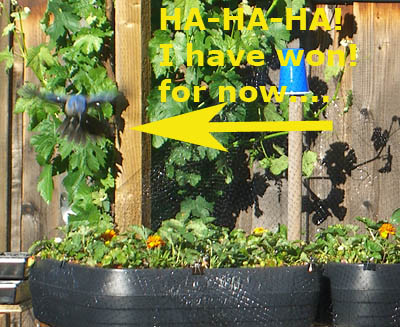