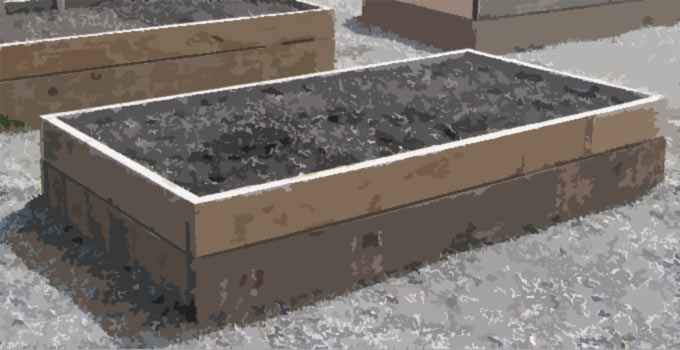 First of all, why would one build a raised garden bed at all?

The most likely answer is for the sake of bending over and your back.

Other reasons include the comparative ease to amend and control the garden soil, and the potential to construct / attach a sort of green house cover in order to start the growing season earlier in the Spring.

I’ve built more than one raised garden bed in my life ( ;) ) however I’m about to build a few more. So I’m revisiting different ways to build them and formulating a plan…

I suspect that the most common material used to build a raised garden bed is wood, though surely others have used building materials such as cinder blocks or even poured concrete (permanent!).

Here’s an article about building a garden bed framed with concrete.

Today’s modern method of pressure treating wood utilizes a process that forces tiny microscopic particles of copper into the wood itself: Micronized Copper Quaternary (MCQ). The leaching of chemicals out of MCQ is practically non-existent and using the treated lumber for a vegetable garden bed is considered safe because the chemicals do not leach out into the soil. This according to the National Gardening Association and similar statements and studies by Texas A&M Agricultural Extension Service and others.

I will be using today’s pressure treated lumber for my raised garden beds.

Screws
I will be using Star head screws designed for building an outside deck.

Why? Because they’re purpose-built to withstand the outdoors, and the Star head is far superior than a ‘Philips’ head screw (which can strip out if abused). Knowing that years later I will be able to easily remove the old Star screws without them stripping is reassuring.

Important: Use wood screws designed for use with pressure treated lumber. Otherwise they will corrode. An example would be commonly available Deck Mate Star-head screws that have a lifetime polymer coating.

I plan to use 4″ length screws which will bite 2.5″ into the adjoining 2-by boards.

Garden Bed Lumber size
I will be using 2×12 lumber in 12 foot lengths to build a frame 4 feet wide by 12 feet long.

I will be stacking two levels so the overall raised garden bed will be about 2 feet high.

Screen mesh for bottom
I will be using a screen mesh material (1/2″ mesh x 4′ wide roll of hardware cloth with galvanized finish) to attach to the bottom of the garden bed. This will prohibit underground burrowing creatures from stealing my carrots and such – just in case ;)

Slapping together four pieces of lumber to build a simple frame isn’t rocket science. However I’ll point out a few thoughts…

Leveling
If you’re concerned about appearances you should consider leveling the ground itself first. Depending on your land, it may be a bit challenging to get it perfect. In that case I suggest shimming where necessary while using an ordinary level for guidance.

Joining 2 stacked frames for a taller garden bed
There will essentially be two frames, one stacked on top of the other for double height. In order to secure the two sections and to prevent uneven warping of the two sections over time, this is what I’ll do…

With one frame set on top of the other I will join them together with a board fastened along the inside of each of the four adjoining seams. I will use a pressure treated 1×6 along the length of the inside seams (overlapping half above and half beneath) and screw it all together. I’m using 1×6 (instead of something a bit smaller) because I’ll be using 2×12 lumber for the top and bottom framed sections.

Prevent bowing of the wood after filled with dirt
It’s possible that the sides could bow out somewhat over time due to the weight of the soil pressing outwards. This may be especially true with a long run (I’m doing 12 feet).

To help prevent this I’m going to strap (screw down) a 4 foot length of a ripped 2×4 across the top of the garden bed width at it’s center. This should hold the middle together without it bowing outwards.

Another option may be to screw in a joist hanger opposite each other and set in (and fasten) a 2-by across the width, flush with the top.

Still another possibility is to drive stakes into the ground along the edge of the walls and screw them to the lumber. Doing so on the inside will hide the stakes.

I’m going to align the length of my raised garden beds North-South. The planted rows will then have advantage of the morning and afternoon sun as well as a better spread of sun as it passes over from side to side. I will also plant my taller plants on the north side of the garden beds.

So that’s my plan…