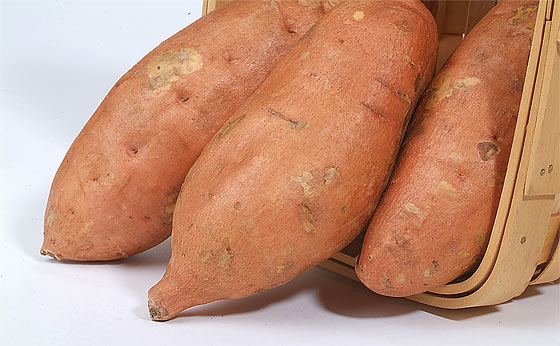 Sweet potatoes are probably the longest storing vegetable your garden will produce. When handled and stored properly they’ll keep 8 months or longer in our Midwestern climate.

Although generally thought of as a Zone 5 or below crop, they can be grown successfully in most any State with a little planning. From planting to maturity is about 90 days.

Although you can buy “slips” from seed companies, growing your own is so easy I don’t know why anyone would buy them. There are several varieties of Sweet Potato, but the most common is the Beauregard, which is what you’ll find in most stores.

Using a metal rod, we use brazing rod, skewer the potato roughly through the middle of its long side. Fill a jar with water, we use ½ gallon jars, and suspend the potato in it. Over a period of a couple weeks you’ll see sprouts emerging both above and below the water line. When the sprouts have reached about 9-12 inches cut them out of the potato, leaving about ½” surrounding the base. A large potato will yield 12 to 15 sprouts, left suspended in the water it will continue to put on sprouts.

Put each sprout into its own plastic cup filled with water (we use 16 oz cups). They will continue to grow, and in about 4-6 days will have grown roots. Each of these root filaments will become a potato. Allow them to grow just short of becoming root bound in the cup. They’re now ready for planting.

Preferably loamy, well draining soil, with medium acidity. Our soil is heavy with clay, so we have amended it with plenty of compost and sand with good results. Work the soil as loose as possible, to a depth of about 10 inches. Soil temperature should be 50 degrees or above before planting.

As opposed to regular potatoes, sweet potatoes like warm soil. In cooler climates it’s recommended to cover the planting area with 4’ wide clear plastic sheeting. Clear sheeting allows the sunlight to warm the soil much better than black, and will hold much of the heat from escaping. I’d suggest putting the sheeting down mid-May, with an eye toward planting in early June. Seal the edges of the sheeting with soil to keep soil warmth and moisture in, and also eliminate any weeds.

How To Plant Sweet Potatoes

If you’ve used sheeting (Northern Climates), cut an X, and burrow a hole that will allow the root and about ½ the stem to be buried. Fill the hole in, and press a slight depression in the plastic about 10” diameter to allow water to drain toward the plant. Plant about 2’ apart. The vines will grow out to 6’ diameter, so plan where you place them accordingly. The vines will grow intertwining each other, but will invade other vegetable rows if planted too close to them. Don’t trim the vines back, as it will inhibit potato growth. In our area the growing season is long enough we don’t use sheeting.

How To Care For Sweet Potatoes

It’s not absolutely necessary, but I’d recommend removing the sheeting when the weather has warmed. This will allow better evaporation, and allow you to water the plants with the rest of your garden without the possibility of too much trapped moisture. If you’ve used good compost in your soil, you shouldn’t have to side dress the plants with additional fertilizer.

Sweet potatoes can be left in the ground until the first frost, allowing you to harvest and cure them in amounts that are easiest for you to handle.

Cut the vines away, and using a garden fork start digging about 18” from the stem. If you stab a potato don’t plan on storing it. Sweet potatoes look sturdy, but they’re not. Bruising will cause possible rot spots, so handle with care. Don’t throw them into a wagon, place them in.

Freshly dug potatoes don’t have much flavor, that will develop over a few weeks. Also, the potatoes will “cure” over the next 10 days, growing a second skin that will seal the potato for storage.

We lay our crop out in the sun on a light colored tarp to cure, after brushing the majority of the dirt off. We store them “dirty”. Morning dew won’t hurt them, but cover them in the instance of rain.

Do not store sweet potatoes in plastic containers, use open top cardboard boxes. Put the potatoes in the boxes not touching each other, with newspaper between the levels. Some people wrap each potato in newspaper, but we’ve found it to be more work than necessary. We fill the boxes to just below the rim, then use boards to support the next box. Store them where they won’t freeze, we put them in our attached garage. A basement would also work nicely if not excessively damp.

If you’re going to bake them, just wash and bake. If you want to peel them for hash browns, mashed, etc. you’ll find that second skin to be a real pain. Put them in boiling water for about 3 minutes, and they’ll peel like a regular potato.

Note: Sweet potatoes contain more than 400 calories per pound, about 180 calories per cup (similar to white potatoes) and are a great ‘survival garden’ choice…