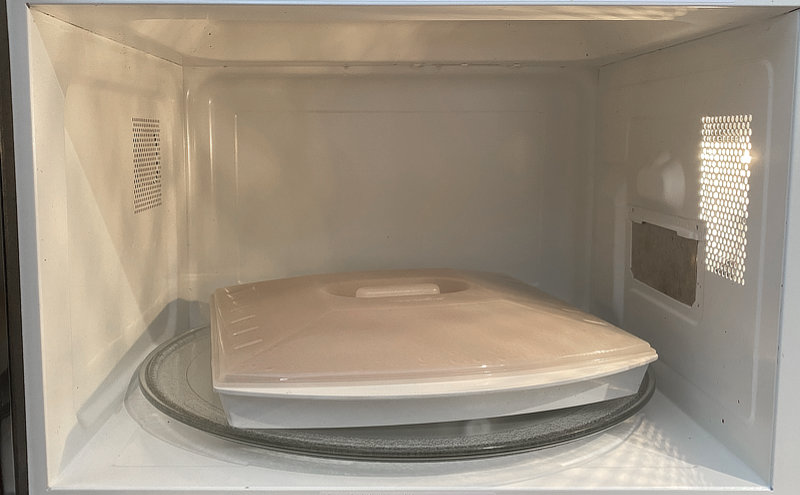 I just had to post about this. Why? Because this is the best bacon cooker / grill tray I’ve ever had for microwave bacon!

I just finished a tray of bacon this morning and I thought, “This would be a fun post for some people…”

These days with many at home in “lockdown”, people are cooking more than usual. Especially since so many small businesses (restaurants & eateries) are now “out of business” thanks to you-know-what.

Anyway, we bought this microwave bacon cooker during the summer. I was tired of splattered bacon grease either in the oven or all over the stove top (depending how I chose to cook it). It’s not fun cleaning up that splattered grease. This is exactly what inspired me to try a microwave bacon tray. NO SPLASH – EASY CLEAN!

After a search, I quickly discovered what appeared to be one of the most popular microwavable bacon trays. And it was pretty cheap (as in not expensive). So I bought it and gave it a try.

>>check it out “PrepSolutions”
(view on amzn)

How To Cook Microwave Bacon

It’s easy. However pay attention. Once you get used to how it works in your particular microwave oven, then it’ll be easy after that…

I always fill the tray. That way, the cook time is pretty consistent each time. But know this >> the total time varies a bit. Depends on the bacon itself and how thick it is, the consistency, and it’s size. But again, you will come to know what works for you.

Mrs.J likes her bacon pretty darn crispy (but not burnt!). I like mine less crispy. But you know who wins this one… that’s right, Mrs.J. So I cook the bacon to a relatively dark crisp. Be aware that even another 30 seconds can burn it. Your nose will let you know too.

So how long to cook bacon in the microwave?

With the caveats mentioned above, a tray of 5 slices (which is typical for this bacon tray) it takes 5 minutes 30 seconds at power level (80%) in my 1200 watt microwave. Sometimes it’s 5:45. Others it’s 6:00 (though not often). You will discover an approximate 30 second window of variability – depending on what I’ve mentioned above. Experiment. You’ll find out what works!

Did I mention that the cover (though it has vent slots) prevents splatter? Love it!

How does microwave bacon taste?

Simply put, it tastes as good as in the regular oven! In fact, I really like how the tray collects the bacon grease while leaving the bacon itself crispier. It doesn’t sit there and cook in its own grease. Rather, it sits atop a grill of sorts. Nice…

How to clean a microwavable bacon tray

In case you’re wondering if it’s a pain to clean the tray… No! Here’s how I do it:

After removing the cooked bacon, pour the bacon grease into a leftover aluminum can. I save some of my dog food cans for this. Do not pour down the drain because it will wreak havoc downstream so to speak… especially if you have a septic system! Don’t do it!

The grease will solidify in the can, and you can just toss it in the trash. I also SAVE some of my bacon grease. I pour it through a metal strainer into a bacon grease container. This provides some yummy grease for frying eggs!

Next step in the cleanup process… Set the tray in the sink. Pour a bead of dish-washing liquid (Dawn is awesome) across the grill as shown. Then, with hot water from the faucet, add enough water to just fill the tray.

Let it sit for awhile (at least 5 or 10 minutes). This loosens up the particles a good bit. Then I simply dump it out, rinse again with hot water and put it in the dishwasher. Perfect results every time. A hand wash will be easy too.

Okay folks. That was exciting, yes? :)