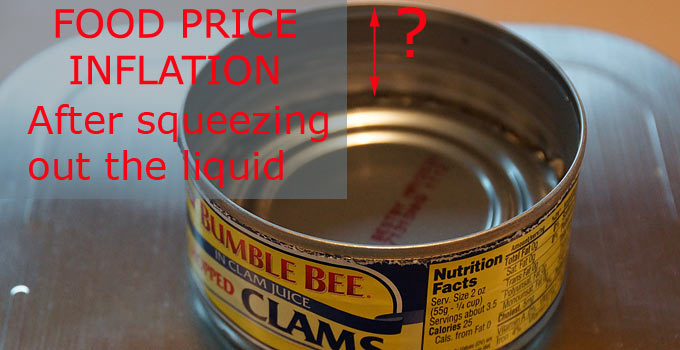 How long can they continue to hide food price inflation?

Can you say, “Food packaging schemes”?

I often notice that while food prices in general continue to creep higher, the packaging is cleverly shrinking or hiding the fact that there’s less food inside.

The stealthy shrinking packaging may go unnoticed for awhile – until a threshold is triggered when you suddenly realize what’s been happening.

For example, I noticed a particular brand of peanut butter on the shelf that I had bought a few years ago. Since my recollection of the flavor was savory, I decided to buy it again on a whim. The price seemed fairly reasonable… until I picked it up and realized that the jar was smaller than it used to be! I could instantly ‘feel’ that the diameter of the jar was narrower than before. I just knew it was different. That’s food price inflation.

Another example, the other day I made myself some Linguini with clam sauce. I opened a so called 6.5 ounce can of chopped clams. The can gives the appearance that there’s plenty of food substance in there. Well guess what? After you open the can and use the cover to squish out the liquid, there’s barely any meat in there compared to the visual of the can itself (image shown above)! So I scooped out and measured the weight of the meat with my digital scale. No, it wasn’t 6.5 ounces, it was actually 1.7 ounces!!

Do you remember when foods were packaged in # of ounces (without decimals) that made sense? Numbers like 16 oz. or 12 oz. etc…

What is the sense of a 14.3 ounce food package weight? Most likely this product was once packaged in a 16 ounce containment. Where did the 1.7 ounces go?

The answer is simple. The slight reduction enables a disguised food price inflation. Packages (or at least the weight therein) are getting smaller and smaller.

Now lets do the math. Lets say that product xyz is priced $3.00 (same as it was 4 months ago). However instead of being packaged as 16 ounces, now it’s only 14.3 ounces. Some people may not notice the small change in weight because of the clever way that the container and labels are redesigned to create the appearance that it hasn’t changed.

Well, that difference in weight (1.7 ounces) is almost a 11 percent food price increase! This is a major way in which food companies have been hiding food price inflation.

Nowadays, not only are the packages getting smaller, but they are also raising food prices. A double-whammy. That $3.00 product not only went up 11 percent because of a downsized package, but they also raised the price to $3.29, (an 8 percent price increase)! Add both together the total food price inflation has gone up 19 percent in this example!

Another way of saying this is that the purchasing power of your dollar has decreased by 19 percent, in this example.

They Make It Difficult To Know

When comparing similar food products on grocery store shelves to determine the best price between them, you really need to read the shelf tags to determine the price per unit (make sure the units are the same – they sometimes confuse the issue here too).

What Can We Do About It?

Now that we see what is happening with food price inflation, what can we do about it?

Well, we can’t stop the tide. However we do know that prices will continue to rise while packaging shrinks.

So, if you think about it, the more food that you buy now (before further price inflation), the less it will comparatively cost in the long run.

That means stocking up (where you can) to save for later.

1. You save a bit of money in the long run.
2. You’re building a deep pantry for preparedness.

More: How Grocery Inflation Is Being Covered Up

More: They Always Find A Way To Screw Us…