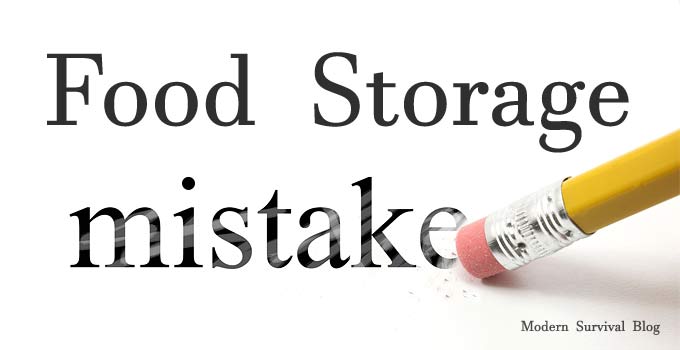 Food storage mistakes are more common than you may think, especially for the newbie prepper. While it is one of the first things that most preppers initially set up and acquire regarding their family preparedness, there are mistakes to avoid.

Acquiring food storage for preparedness is easy to do. It has a big impact on general preparedness, and it doesn’t cost too much money to get started. It can be done a little at a time, or, as quickly as you want.

However there are also a number of food storage mistakes and pitfalls to avoid.

Here are a few to consider:

When first setting out to fill a deep pantry for preparedness, it’s easy to go overboard and start acquiring foods that you might not normally eat. Instead, especially at first, just start buying more of what you do eat!

Exception: Regardless of whether or not you normally eat them, there are foods that I do advise acquiring. Dry goods that store well for long term such as rice, beans, and wheat. Why? Because they’re packed with calories, they will sustain life, and they are easy to store for many many years (if stored properly).

Not diversifying a variety of foods

In other words, buying too much of one thing or just a few things. Can you imagine just eating rice & beans day in and day out? Balance and variety are important. It’s great to have 5-gallon buckets filled with rice, beans, and wheat – because they can store for decades. However keep going with a wide variety of other foods too. Think about it in categories.

Getting started with food storage, but not following through

It’s easy to get excited about starting a new project or setting out on a new goal. But it’s harder to follow through to completion.

Keep on acquiring. Every time you’re at the grocery store, pick up some extra for your deep pantry. Keep filling those shelves. Not only will it set you up for preparedness, it will also save you money in the long run because food prices don’t go down over time…

Building up a food storage supply and letting it sit there

Although many foods will be safe to eat beyond their “Use-by Best-by” date, the best way to utilize your food inventory is to consume it!

Rotate your food storage by actually consuming and replacing. Consume the oldest first, and so on… Again, don’t forget to replace it!

Not making a food inventory

After awhile, you will not remember every little thing that you’ve acquired. It’s a great idea to inventory what you have in food storage. I don’t do it for everything – that would be way too much work. But I do have a record of my major dry-goods long-term storage, and my #10 cans of this and that… My goal was to have an idea of # CALORIES in my storage (equivalent survival days). This takes some math, but it’s doable. And important to know how much you really have. After awhile, you get the general sense about how long your food would last you…

We simply use an Excel spreadsheet. You might choose to simply write it on paper. You can be as detailed or general as you like. But it’s a good reference to have, especially while practicing good food rotation.

Buying too much freezer food

It sure is nice having a chest freezer filled with food. I have several. However, don’t let that be the majority of what you’ve stored!

Why? Because if the electricity goes out, you might lose what you have! You might be okay for 48 hours, but unless you have a generator and unless the power comes back on before you run out of fuel, you will be SOL.

Not labeling your foods with date of purchase

This only applies to certain things, but it’s worth mentioning. For example when I acquire (or DIY) a 5 gallon bucket filled with rice or wheat, I apply a strip of white artist tape and with a Sharpie write month/year. This way, later on I know which is oldest, and I’ll use that first! We also do this with some freezer food packaging.

Be aware of food shelf life

Some foods last ‘forever’ (almost). Spam anyone? Haha… I’m just suggesting that you become aware of expected shelf life – which may differ quite a bit from one to another. Here’s an example… There are many #10 canned foods that may last for 10 years, 20 years… depends on what it is. However just because it’s professionally packaged this way, doesn’t mean it will be good for decades. Powdered dairy products are significantly less, for example. Just check.

Don’t forget about all the other stuff that makes food taste great!

Herbs, spices, condiments, etc.. They are pretty important too. We purchas a lot of our regular spices in bulk/quantity. Not only does it cost a lot less that way, but you can store it for long term too.

Buying too much of something that you haven’t eaten before

Something might sound like a good idea to have (for whatever your reason). However, if you have not eaten any, you better try a small quantity first.

For example, lets say you’re considering some particular dehydrated or freeze-dried food packaged in #10 cans for long term storage… You may or may not be surprised that when you open and consume it, you may or may not like it! You get the idea…

The enemies of long term food storage are heat, sunlight, poor containment, oxygen, humidity – unless you have a root cellar :-)

Of course it depends on what you’re storing, but generally you’re looking for cool, dark, and dry. Not all basements (if you have one) are dry, for example. Rusty cans?

Letting it all just sit there…

Time goes by faster than you may realize. Next thing you know – all those grocery store canned foods are 5 years old… Not saying they’re “bad” (typical best-by dates are ~2 years for many canned foods).

This can be avoided. Force yourself to consume foods from your storage. Consume the oldest first, and then replace it. Ideally you would be mostly buying foods that your normally eat anyway, right?

Let’s hear from you. What are some additional food storage mistakes to avoid?