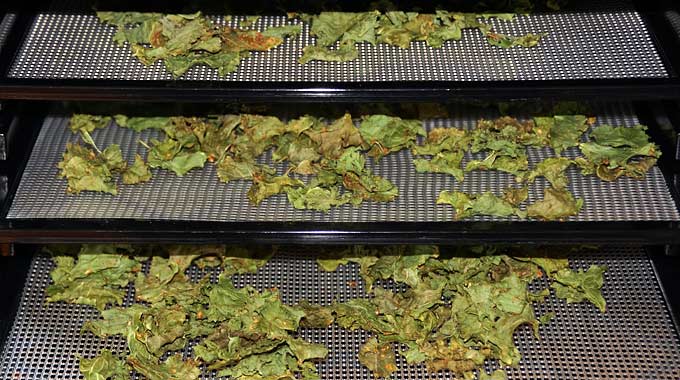 Kale chips (dehydrated), especially when sprinkled with spice during dehydration, are delicious!

Kale, as many of you probably know, is very good for you. It’s a dark green veggie loaded with nutrition. I’ve read that it’s the most nutrient dense food on the planet.

Here’s how to make Kale chips:

The other day Mrs.J went out to the garden and came back with a bunch of Kale. I said to her, “There’s no way we’re going to eat all that tonight…”. She replied, “We’re going to make dehydrated Kale chips”.

I like Kale and this sounded like a great idea. And a chance to use our dehydrator.

How To Make Kale Chips

Rinse it under some water.

While wet, sprinkle on your spice of choice and mix it all up in a bowl to adhere all over.

Dehydrate at 125-degrees-F for about 3 hours.

It’s done when the Kale is crispy. If it’s still leathery there’s too much moisture so keep going till crisp.

By itself, the Kale tastes like Kale. Both Mrs.J and I like to spice things up, especially with a little heat.

So we experimented with a few different spices. Some of the chips we sprinkled with “Southwest Spice”. We also tried something called “Harissa” which she had in the spice drawer.

Both tasted good to me!

Obviously any spice will work. Just sprinkle on the wet Kale. Whatever floats your boat.

Why is Kale healthy?

It’s a “leafy green” and loaded with powerful Antioxidants including the flavonoids Quercetin and Kaempferol.

Kale is very high in Vitamin C and is apparently one of the best sources of Vitamin K.

Beta-Carotene is an Antioxidant that the body turns into Vitamin A, and Kale has plenty.

It is also a good source of calcium, magnesium, and potassium.

High in Lutein and Zeaxanthin (good for the eyes).

Why am I talking about this on a preparedness blog?

One, it is an example how we can preserve some of our garden bounty and hopefully encourage even more gardening. Dehydrating something like Kale which would otherwise spoil fairly quickly is an excellent way to extend the benefits of fresh homegrown veggies.

The other is your health. Kale happens to be one of those leafy vegetables that is extra good for you…

SUMMARY
Kale is a very healthy food. By making your own Kale Chips you might actually enjoy the tasty snack and eat more of it. Back during 2016 I ran a Poll to discover which vegetables you plant in your gardens. Kale came up #21. Maybe next year you might add this healthy vegetable to your own garden.

You can see some of the spice dotted on the Kale leaves in the following picture: 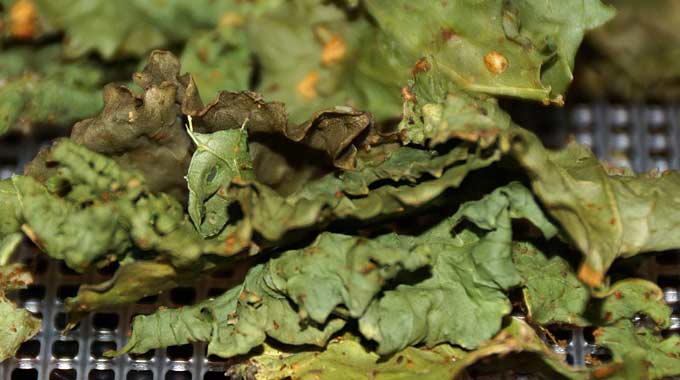