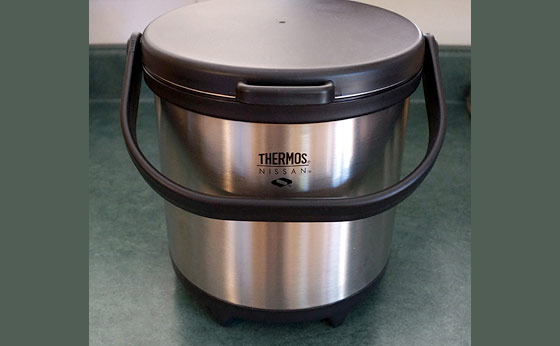 Years ago I bought what you might call a Thermos thermal cooker. It’s Thermos brand, and we have used it many times to slow cook certain foods, kind of like an insulated crock pot would do… except you only heat it up once, and then insert into an insulated container to retain the heat.

Updated with newest (and less expensive) thermal slow cooker.
(jump below to recommendation)

Cooking requires fuel. And fuel consumption depends upon the efficiency of the cooker (and what you’re cooking, and how you’re cooking it).

Awhile ago I bought a small but well insulated thermos. I experimented while using it as a sort of thermal slow cooker for rice. Given the success that I had with it, I decided to go bigger.

So I purchased a purpose-designed thermal slow cooker. It’s bigger (4.5 Liters) and I have been very impressed with its ability to slow cook foods. It requires very little fuel compared to other traditional methods.

The principle of a thermal slow cooker is simple. It’s kind of like a crock pot thermos. Without having to plug it in.

First, use the stove (heat source) to bring the pot to boil. For example water and rice, water and beans, sauces, stews, etc. Fill at least to 80% capacity for best thermal mass.

Next, remove the pot from heat. Put on the pot’s lid and set inside the the insulated thermal cooker shell. Close the lid to the the slow cooker.

Then, let it sit and do its job. The heat will hold for many hours.

It’s similar to how an ordinary crock-pot slow cooker works except without the electricity. In its place is a well insulated barrier to keep the existing heat ‘in’.

Why Use A Thermos Slow Cooker?

A thermal slow cooker may seem inconvenient (slow cooking) in a modern world of conveniences (plenty of fuel, electricity, microwave ovens, etc..). But with regards to preparedness (or simply saving fuel), it’s a great alternative method for certain types of cooking.

When I posted about “How To Cook Rice With 80 Percent Less Fuel” (article linked below), I was excited to take it to the next level. The 48-ounce wide mouth thermos worked well to slow cook a relatively small portion for one person. However if you’re looking to feed several people, this wasn’t going to be enough. This is why I bought a larger unit.

What I really like about it is the stainless steel pot. It is a standalone pot (with cover) which you sit on the stove (or a fire or whatever heat source is available). Once you’ve heated the ingredients to an initial boil, simply remove the pot from the burner and set it in the insulated thermal cooker. Close the lid, and you’re done. It’s just a matter of planning ahead for cooking your meal.

Recently Mrs.J used it to cook a pound of Garbanzo beans (for a tasty humus recipe) and I’ve captured a few photos:

As you can see, the temperature of the mixture was still 157-degrees even after 6 hours of slow cooking. Very impressive.

The ‘secret’ to a successful thermal cooker is its insulation. This particular Thermos brand apparently uses dual double-walled vacuum walls to keep in the heat.