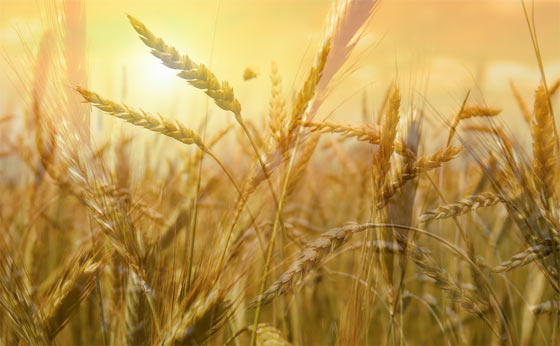 Wheat is the most common grain consumed in the United States. Wheat food storage (in the form of wheat berries, prior to being milled into flour) is also one of the primary dry foods kept by the preparedness-minded for “just in case”.

One reason that wheat is an ideal choice for food storage is because wheat has a very long shelf life if stored properly (decades). The ‘goodness’ (nutrition) remains locked up in the wheat (wheat berries) awaiting the day that you mill it (grind it into flour).

There’s more than one kind of wheat. You may have heard some of the name variations – varieties. Here’s a short and simple explanation…

The kernels of Hard wheat are hard. The Hard wheat kernel is also smaller than that of Soft wheat.

Hard wheat has higher protein because it has a higher gluten content (gluten is a protein). By the way, Gluten helps dough to rise. It helps trap the fermentation gases that result from adding yeast.

The Soft wheat variety has less gluten content. It’s not quite as good at rising a loaf of bread. However, it is preferably used in pastries, pastas, and cereals.

Tip: You can add our own gluten while making / baking your own bread. This is also high in protein.

Winter wheat is planted in the fall. It grows over winter and is harvested the following summer.

Spring wheat is planted in the spring. It grows in the summer, and is harvested in the fall.

Most of the Hard wheat varieties are Red wheat.

Most of the Soft wheat varieties are White wheat.

Having said that, there is a Hard White variety of wheat. It is a compromise widely chosen for making bread because of the opinion that it tastes a bit better than bread made from Hard Red wheat.

The most common variety of wheat found in prepper’s wheat food storage is Hard Red wheat (spring or winter).

I believe this is because of the higher protein content, which is typically 12% or more. However Hard White wheat also has the same long-term storage benefits.

My own inventory of wheat berries include both Hard Red Wheat as well as Hard White Wheat. I do like the White variety better for bread making.

Here’s some grown in Utah and Idaho, sourced directly from family farmers. No additives, Non GMO.

Of course you can source Wheat Berries yourself in bulk and then package it yourself. You may or may not save some money this way depending on the cost of pails, Mylar bag inserts, Oxygen absorbers, and your time. I’ve bought it both ways (do-it-yourself, and, professionally packaged).

The manufacturers of most pre-packaged pails of wheat berries say 25 year shelf life. I’ll bet it’s longer than that, assuming it’s packaged properly and stored in an ideal environment.

I believe my oldest buckets right now are about 12 years old…so I’m not even halfway there yet. I have always kept them in a cool environment. Time will tell!

The following are a number of related articles that may be of interest:

How to Seal a Mylar Bag in a 5-gallon bucket

How Much Wheat In A 5 Gallon Bucket – Pounds, Calories, Loaves Of Bread