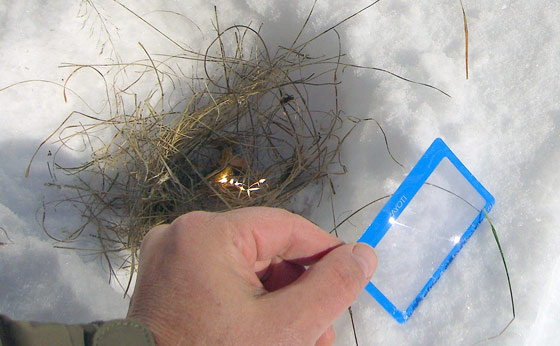 A Fresnel lens, unlike a traditional glass or plastic magnifying lens, is flat. In fact, most are fairly flexible. Fresnel lens design enables a substantial reduction in thickness and they are often made of plastic.

Recently I bought a small pocket size Fresnel lens to be used as a fire starter. It’s actually the size of a credit card – making it perfect to fit in my wallet. Here’s why I bought it:

It makes for a good fire starter (when the sun is fully shining).

Not only might it be convenient for magnifying small print (aging eyes as one gets older) but it serves a purpose as another means to start a fire. Given it’s small size – it presents no additional weight or bulk to what I carry around for every-day-carry.

You could also include it in your fire kit along with your other ways to start a fire.

I decided to give my small Fresnel lens a test the other day – under less than ideal conditions. Except for the fact that the sun was fully shining (necessary for this to work), the season was the real test. During December in the northern hemisphere, the sun does not rise very high in the sky – especially at northern latitudes. Since I’m within the 44th parallel, it’s a pretty good test. Plus, the temperature was in the teens.

I gathered up a bit of dead grass and a few shavings of birch bark. While I didn’t go through the process of building a full-on fire, I simply wanted to see if this Fresnel lens would focus enough December sunlight to set some tinder to smoking with glowing red embers – which could then in turn be utilized to blow into a real fire.

It was a near immediate success. While holding the Fresnel lens at a focal distance which optimizes (pinpoints) the intense spot of light onto the tinder, it only took a few seconds for the dead grass to begin smoldering and smoking.

The key to a fire is not only having a means of ignition, but to have good dry tinder.

Since there was snow on the ground, I also found it uniquely convenient to stick the Fresnel lens into the snow (to hold it up) and I could then play with the distance and positioning of the tinder pile itself.

I was pleasantly surprised with the result, and now keep this small credit-card size Fresnel lens in my wallet.

This one came with a protector – which I trimmed a bit with scissors to fit better in a wallet sleeve. Be aware that these inexpensive Fresnel lenses are typically made of soft plastic and will scratch after awhile and presumably diminish some of it’s effectiveness (which is why a sleeve protector is a good thing).

Anyway – I thought I would share my experience with this neat little fire starter.