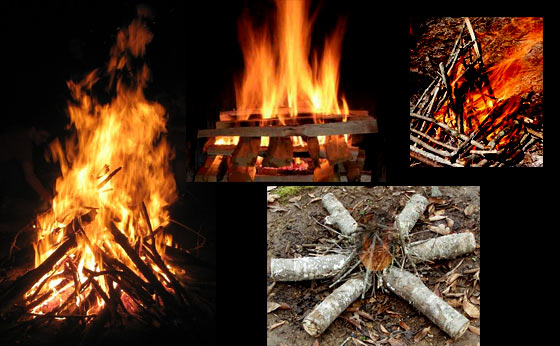 Evidence of the first man-made fire (campfire) dates as far back as the stone age, while no other living creature on this planet has acquired the ability (intelligence) to make fire.

From man’s first campfire to today, many of it’s benefits and reasons for use remain the same today as they did hundreds of thousands of years ago.

Here’s a campfire benefit list and how to build several types of campfires:

While today’s technological advances have enabled alternative light sources such as flashlights and lanterns, a campfire at night will shed some lumens on the subject. A makeshift flaming torch from a wooden limb or branch will provide temporary light.

Perhaps the most often used benefit of a campfire particularly in days gone by is for its warmth. For example there are approximately 29 Million BTU’s in a cord of Oak (a 8’x4’x4′ stack). That’s a lot of heat.

An obvious benefit is it’s use for cooking and boiling water for safe drinking. Staying healthy by eating safe food and purified drinking water is crucial during outdoor excursions.

CAMPFIRE FOR A BEACON

Predators of the 4-legged variety will stay away from a campfire, making it an effective deterrent and benefit during the night if sleeping outdoors or in a minimal make-shift shelter.

CAMPFIRE FOR A SENSE OF SECURITY

Similar to a campfire’s use as a literal predator deterrent, it also provides a psychological sense of security.

Perhaps the most common use and benefit of a campfire today is the psychological aspect of everyone sitting around it and socializing. A campfire has a mesmerizing, comforting and soothing effect on us – promoting pleasant social interaction.

With all that said, an important aspect of any campfire is safety. Too many forest fires have torched millions of acres due to careless regard to campfire safety.

Ideally a campfire should be made in a fire ring. You can build a campfire ring from rocks.

Clear out a wide circular area (10′ diameter) of any flammable debris so that shooting sparks and embers will not ignite the area outside the fire.

Keep water nearby to extinguish an out-of-control fire.

Keep a shovel to smother an out-of-control fire with dirt.

Keep the fire as small as you need it.

Do not leave a campfire unattended.

Also called a tepee or teepee fire, is a common type of campfire that people make. First, the tinder is piled up in a compact heap followed by smaller kindling arranged around it like the poles of a tipi. Then the larger kindling is arranged above the smaller kindling without collapsing the tipi. Tipi fires are great for producing heat to keep people warm. One downside to a Tipi fire is that when it burns, the logs become unstable and can fall over.

A lean-to fire starts with a pile of tinder. Then, a long, thick piece of kindling is driven into the ground at an angle, so that it overhangs the tinder pile. The smaller pieces of kindling are leaned against the big stick so that the tinder is enclosed between them.

A log cabin fire begins with a tinder pile. The kindling is then stacked around it squarely as in the construction of a log cabin. The first two kindling sticks are laid parallel to each other, on opposite sides of the tinder pile. The second pair is laid on top of the first, at right angles to it, and also on opposite sides of the tinder. More kindling is added in the same manner. The smallest kindling is placed over the top of the assembly.

Of all the fire-builds, the log cabin is the least vulnerable to premature collapse, but it is not very efficient because it makes the worst use of convection to ignite progressively larger pieces of fuel. However, these qualities make the log cabin an ideal cooking fire as it burns for a long period of time and can support cookware.

An effective and longer lasting fire is a hybrid consisting of a log-cabin design with a tipi structure built inside of it.

This fire is made in a keyhole-shaped fire ring, and is used in cooking. The large round area is used to build a fire in order to create coals. As coals develop, they are scraped into the rectangular area used for cooking – set your cooking pot on top, etc..

Advantages of the Dakota Fire Hole. A hole dug in the ground about 1-foot deep and wide for the fire, and a vent airway tunnel from the bottom of the hole to about one foot away from the edge to the surface. The fire is invisible (below ground), burns very hot, and intended for efficient cooking.

Also known as an Indian Fire, it consists of five or six logs laid out like the spokes of a wheel (star shaped). A fire is started at the “hub” and each log is pushed towards the center as the ends are consumed.

First build a small ditch about half-a-foot across with a depth of about an inch or two. Then set 5 or 6 lengths of wood in a star around the ditch with a little bit of the end sticking in over it. Then line the inside of the ditch and a few inches inside the pieces of wood with kindling. Set up a tinder nest on top of the kindling in the ditch.

This fire is ideal for calm conditions and can be kept burning all night long with little maintenance. The fire can be controlled easily, and is a great cooking fire especially if you will be cooking using a T-bar hold or tripod for roasting and hanging pots for boiling and cooking.