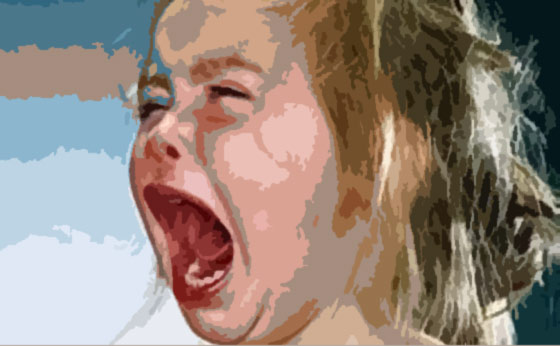 (These days? A Tantrum)

A recent comment here on the blog brought up a good topic…
“Which comes first? Emotion or thought?”

Can emotions cloud our judgement and actions during an emergency?
Do emotions adversely affect the actions of people during everyday life? Should they?
How many people ‘react’ first rather than ‘think’ first?
Is this more of a problem today than before? If yes, then why?
Are people not being taught to ‘think’ anymore?

From the standpoint of general social and societal development, reacting first to one’s emotions might not always be the best first thing to do… While the world would be pretty boring without emotions, a world of ‘untamed’ emotions would be a very dangerous place.

“Emotions are so very, very powerful.”
How many people today base their reactions solely or firstly upon their emotions?

Did you know that emotions are HIGHLY LEVERAGED in today’s modern world of marketing and politics?

Example: In certain political realms, the purposeful ‘tweaking’ of feelings and emotions is commonly used to trigger a desired reaction from the masses. Knowing that the majority of the public are ‘reactionary’ and knowing that most will not ‘think it through’, and knowing that most are poor ‘critical thinkers’ – tweaking the emotions of others can be a powerful tool. This is used by all sides of the political spectrum. And the use of this powerful tool goes beyond just the political realm…

Example: ALL of the advertisements that you see and hear are designed to capture your emotions in order to get a desired response. While marketing and advertising are necessary parts of the system, how many people are drawn in to ‘the sale’ without clearly thinking about it first? How many people recognize that their emotions have been purposely nudged or tugged in a certain direction to get you to buy that thing? Not saying that it’s wrong to buy it, just wondering how many will get into a situation where they shouldn’t be due to not having thought about it well enough first…

My general observations lead me to believe that a majority of people are very much emotion based – to the extent of easily being manipulated.

I believe that parents today (compared to years gone by) very much coddle/shelter their kids too much (even into adulthood) such that many grow up unable to (or inadequately able to) deal with our understand, or accept failure, losing, difficulty, or constructive disagreement with another notion or what someone else may say. Emotions apparently come first, and subsequent actions are often strictly a result of the emotion.

Why is this happening?

Because there’s not enough constructive teaching time being spent with kids during their development.

Because there are lots of single parents.

Because both husband and wife are working full time.

Because some people just shouldn’t be having kids…but they do.

Because typical ‘Day Care’ for kids are not teaching these attributes.

Because each subsequent generation of parents coddle and ‘comply’ with their kids even more than before – magnifying the problem. It’s hard to teach kids and it takes time, patience, and commitment. Fewer and fewer parents want to devote the time necessary (for a variety of reasons).

School systems today are actually promoting ’emotional based thinking’. Not all schools, but certainly those of a particular political leaning.

Kids (and now adults) are used to getting what they want. When they don’t get what they want, their ‘screaming’ often enables them getting it.

There are lots of other reasons…but I digress.

Might it be ‘healthier’ for the individual, and for society in general, to delay or squelch the initial emotional reaction and ‘think’ before one acts or speaks? I do believe that this is something that needs to taught and emphasized through one’s upbringing and development. I don’t believe that it’s something that comes naturally.

When emotions rule actions, we devolve as human beings. And I believe that we are indeed devolving in this regard.

Has our very modern world and have our very modern lifestyles made it too easy for us? When many or most people are able to get pretty much whatever they want, does this help or harm the ability to think critically?

Another angle is that of survival during emergency situations. If we become overwhelmed by the emotional impact during an emergency, we might not be able to make good and quick decisions – particularly when seconds count…

This is why training is so important. It helps you to be better prepared for that ‘shock’ of adrenaline or emotional distress. Training will help condition your ‘muscle memory’ to perform under duress.

CONCLUSION: Emotion may naturally come first, however emotional response should probably best be delayed until you have ‘thought’.

Critical thinking is a survival skill. It is relevant for ‘modern’ day to day survival and societal development as well as emergency/disaster survival.

Practice, training, teaching. When we feel ourselves getting ’emotional’ (angry, upset, scared, etc..) we must first RECOGNIZE that we are feeling it. THEN and only then can we force ourselves to remain calm – let it die down a bit – and then THINK before we act or speak.

Teach your kids to ‘think’. When they fail, use the opportunity to exemplify that failure is a part of life and use it learn and better one’s-self for success next time.

So, what are your thoughts?