An Urbanized Area (UA) is a statistical geographic entity consisting of a central core and adjacent densely settled territory that together contain at least 50,000 people, generally with an overall population density of at least 1,000 people per square mile.

An Urban Cluster (UC) is a statistical geographic entity consisting of a central core and adjacent densely settled territory that together contains between 2,500 and 49,999 people.

Regarding the risks associated with the development of social chaos in the aftermath of a SHTF scenario, Urban Areas will be the primary centers of core chaos. Urban Clusters will also be vulnerable, especially those which are in close proximity to Urban Areas, but may not devolve to the same level as Urban Areas.

Living outside any of these areas is considered rural.

The following map from the U.S. Census data of 2010 identifies all of the Urban Areas and Clusters in the United States and may prove informative for those who are interested in such things… 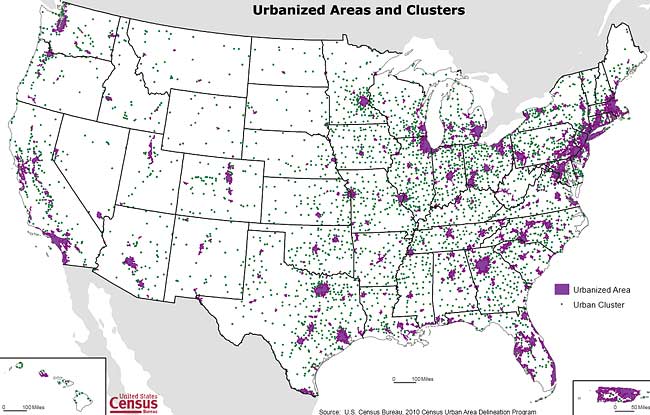