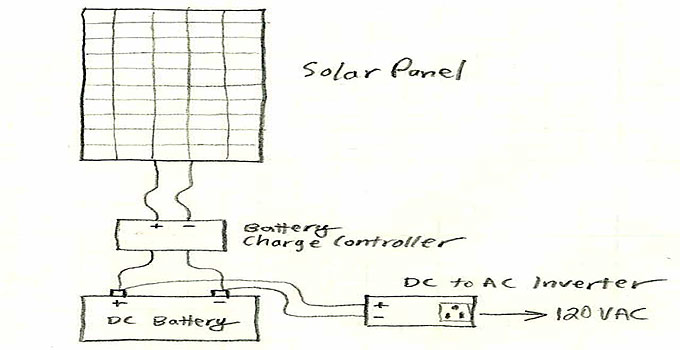 Solar power systems vary widely in their power producing capabilities and complexity. But I wanted to sketch a simple basic solar power system diagram that shows the building blocks.

Regardless of a given system’s capacities and specifications, there’s a common thread among most of them: The basic building blocks of its major components.

I’m posting this for the beginner or the curious. The basic diagram.

The basic solar power system diagram. This does not include the additional related various subsets of components which may or may not be required depending on your installation. Things like interconnecting cables, solar panel mounts, brackets, branch ‘Y’ adapters, combiner boxes, circuit breakers, shunts and meters, grounding hardware, and other details).

First, Is Solar Power Worth it?

It depends on your objectives! First, lets face it… To implement solar energy is not cheap compared to today’s energy from the grid. Though the costs of solar are coming down!

One could argue that from strictly a cost savings point of view it might not be practical.

It may take years to reach a break-even point. Why? Because a cost analysis of a solar power system compared with that of your electric utility bill will speak for itself.

Depending on the system design and usage, the break even point varies widely.

Hover, It’s Worthwhile for Many!

Despite the cost of a given solar power system, for many it’s a worthwhile investment.

Example: If purchasing a new property with land far from the nearest road with electric utilities, it may actually (very likely) cost less to implement a solar power system than pay to run electricity to your property.

For the preparedness minded, simply having a very basic solar power system (or bigger) provides some peace of mind (at least it did for me). I built an off-grid solar power system which is ‘side-by-side’ with my home’s grid power. I’ve integrated it through ‘transfer switches’ for some of my home’s electrical circuit breakers.

Some people may choose to put together (or at least have on hand) a small system for ‘just in case’. Maybe just several hundred watts to charge several deep cell 12-volt batteries connected to an inverter (for example).

Solar power systems are also becoming popular for RV’s. A few panels up on the roof can make boondocking a bit more comfortable!

Without going into great detail, I thought that I would illustrate a very simple and basic solar power system diagram. This one represents the high level building blocks of a stand-alone system. I sketched a diagram:

It all starts with a solar panel or panels.

The solar panel (or panels) connect to a charge controller.

The battery (or bank of batteries) also connects to an inverter (DC to AC). The inverter converts the batteries ‘DC’ (direct current) to ‘AC’ (alternating current) for use with typical consumer appliances and devices.

Note: You don’t need the inverter if you’re only running 12-volt DC appliances.

Here’s another solar power system diagram. This one from Renogy.

It’s not terribly difficult to assemble a basic solar power system. Though it does really help to have an understanding of basic electronics and electricity! But even if you don’t have that knowledge, today’s ready-made kits can make it fairly easy. Or, maybe you know someone with some understanding of electricity who might help you. And then there’s always YouTube which surely has plenty of “how to” videos about this topic.

If you’re interested to research this further, it would be beneficial to read up on the subject. Here’s a popular one:

[ Read: The Four Essentials of Off Grid Solar ]

[ Read: How To Measure Power Consumption During System Design ]

This article has been updated since its original post date to clarify the simplicity of a solar power system block diagram.

[ Read: Solar Power and Energy Requirements – How To Calculate Your Needs ]