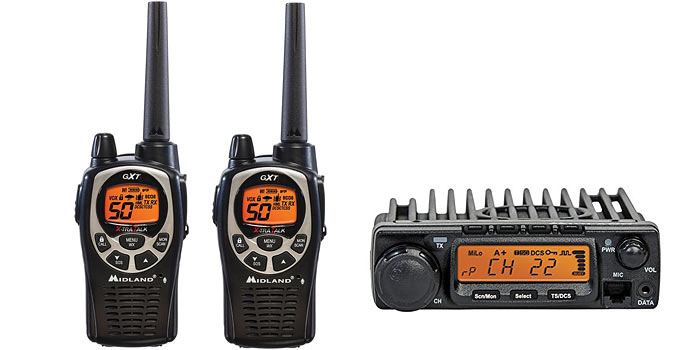 “Cell phones are great but before them people used CB’s (no license needed for CB), and today a lot of preppers are working on getting a ham license and buying a $30.00 radio.” says Chuck Findlay who recently commented here on MSB.

It doesn’t take a Mad Max grid-down World to have the cell network go down. Any terror attack and it gets overwhelmed.

I think I read that when the Boston Marathon bombing happened they shut down the cell network just in case there may have been cell phone bomb triggering devices.

No one wants their cell phone shut off but in this case I can understand (and agree) with doing so.

CB and Ham radio can fill the gap. And they are fun to use when there is no problem. I often (in the Summer) sit in the back yard with one of my hand held ham radios talking to friends within a 25-mile range of my house.

You can easily do the same thing with a $30.00 hand held ham radio and a ham license.

PS: Remember all those B-Grade movies in the 1970’s about CB radio?? As bad as they were they got a lot of people to buy a radio and install it in their auto.

Chuck brings up a great point which I’ve attempted to tackle a few times before here on the blog. Emergency communications.

There are a number of options available to us.
Some require a license from the FCC, others don’t.

They transmit and receive over the air waves – for free.

A 2-way radio will have some limitations for distance, but most work well for (at least) local or nearby communications.

During my last long distance road trip I installed a CB in the truck and would listen to trucker-talk along the way (which can be amusing!). You can transmit and receive for many miles depending on antenna, terrain.

Around the property here we have a number of handheld GMRS 2-way radios so we can stay in contact while out and about. I live in some fairly rough wooded and mountainous terrain, so the effective distance between handhelds is about a mile (as long as I’m not behind a mountain). I can get several miles or more if line of sight without obstructions.

You can boost pretty significantly by installing a GMRS mobile / base unit in your vehicle or at home along with a good base antenna. (Could do the same with a CB radio).

I use the Midland MXT400 for a base station GMRS radio and have installed a high gain antenna outside. We have communicated between the base and my handheld 9 miles away out in the woods. Again, as long as there’s not a mountain in the way…

I’ve also reached out 55 miles to a repeater without issue with this radio!

Note: The unit above operates on DC volts (e.g. car battery). If using as a base station it will require a 13.8 VDC power supply with sufficient power handling capability for it’s maximum transmitting power (plus a margin). In this particular case (40 watt) we’re looking at 3 amps plus a margin. I wouldn’t go less than 5 amps.

I use this one (10 Amps) because it’s convection cooled (quiet) and brand reputation:
Samlex SEC-1212

There are also “HAM” radio handhelds (and base stations) which operate on other frequencies which can also be used for over-the-air communications. They require a license from the FCC to transmit. It can be an enjoyable hobby too.

Distance depends on frequency characteristics, atmospheric conditions, antenna, and other factors. Generally speaking the most effective way to increase your transmitting distance at high frequencies (e.g. GMRS) is to have a quality antenna, and the higher the better!

For preparedness sake, do not count on your cell phone.

I really feel good about having various 2-way radios for communications. I am well geared up with GMRS radios. A nice base station and antenna, a unit in the truck (with roof antenna), and a number of handhelds (Midland & Baofeng).

I could set up the neighbors with 2 way radios and we could all be in touch during a time of emergency or when it’s necessary. Great for added security.

We use these radios during ordinary times too.

What are your thoughts and experiences with this subject?