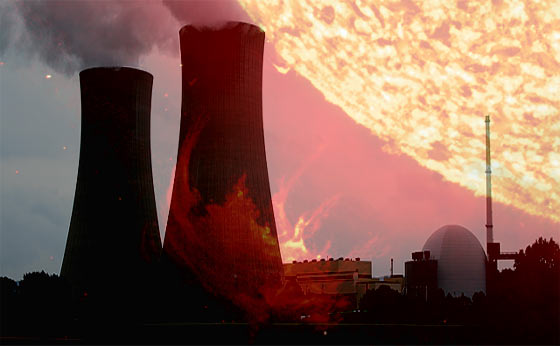 An EMP (electro magnetic pulse), if strong enough (and regardless of the source – weaponized or solar), will potentially fry electronics and electronic systems within its invisible sphere of destruction. Many expert opinions and reports suggest that our electrical power grid could go down.

A large weaponized nuclear EMP detonation (or group thereof) high in the atmosphere will cause a wide ranging debilitating EMP.

A solar super flare (X-50+) and accompanying CME (Coronal Mass Ejection) will zap the surface of the earth with an even longer lasting EMP as it did during 1859 (the Carrington event).

The question is, What will happen to our nuclear reactors following an EMP event? Will we all be facing extermination from hundreds of simultaneous meltdowns?

An X-60 solar super-flare leaps off the sun with its coronal mass ejection (CME) heading straight towards earth. The CME (a slower moving cloud of charged particles than the X-ray burst), reaches the earth – and the solar particles interact with earth’s magnetic field to produce powerful electromagnetic fluctuations. It is these fluctuations that produce electrical currents in electrically ‘conductive’ things here on Earth, such as our criss-crossing power lines suspended above our streets. Electrical currents build up during the lasting event, and while some grid circuit breakers trip in an effort to save itself, many transformers and their high number of internal windings of copper wire continue to heat up and overload until they burn up as they exceed their design capacity.

Electricity across the land will be gone. Lights out. Communications and cell phones – down. Gas station pumps – down. Banking and commerce – down. Food distribution networks – down. Transportation grinds to a halt.

Much of the electricity may not be restored for months or even years due to the unimaginable requirements of transformer and electronic infrastructure re-manufacture and replacement.

As if that isn’t bad enough, what happens to our nuclear reactors?

While modern civilization will rapidly deteriorate into chaos, the worst of it may be just beginning. What happens to the world’s 440 nuclear power reactors (about 700 if you count all research reactors)?

Nuclear reactors while running normally, are essentially in a state of controlled meltdown as they heat water into steam which turns the turbines that produce electricity. Could it be that the only thing saving us from disaster is the constant supply of fresh cool water that keep the nuclear rods from melting down?

The nuclear plant operators will be trying to safely shut down the reactors with whatever backup power they have available to them (a SCRAM). Following that, they will need to keep the nuclear rods cool – even when they are not ‘running’ in the reactor process. The problem though with this process is you can’t shut down all radioactivity with the flip of a switch.

For a reactor that is SCRAMed after holding a constant power level for an extended period, about 7% of the steady-state power will remain after initial shutdown due to fission product decay. A long cool down period will be necessary afterwards. The cool down from the residual heat (of the radioactive decay) requires circulating water and operating pumps. Without cooling, the fuel rods will heat up to the point where they can melt.

How long do the rods need to cool after a SCRAM?

To give you an idea, one bit of research revealed that even a week after being shut down, the heat from a reactor core boils water at a rate of nearly 60 gallons per minute; and after a month it’s still boils off 40 gallons a minute (source).

Separate from the scrammed rods of the reactors, there is the issue of the spent fuel rod Storage pools of the containment facility. They too need a constant supply of water.

Backup batteries will keep pumps running for a day or so.

Diesel generators (assuming they or their electronics are hardened and not damaged from the effects of the EMP) will keep pumps running as long as there is diesel fuel on hand. A question is, do the nuclear plants have enough stored diesel fuel to keep the cooling pumps operating for months and months afterwards?

The fuel (gasoline-diesel) distribution systems will be down (or mostly), so where will the fuel come from? This will obviously be a high priority for plant managers, but will they all be able to scrounge up what they need?

It is a foregone conclusion that a Carrington event will happen again. When it does, will we be ready? Will the world’s arsenal of nuclear weapons (and EMP weapons) always remain silent and unused? Will the world’s ‘leaders’ always be sane? There are risks, and this article simply exposes one or two – and presents questions for you to ponder.