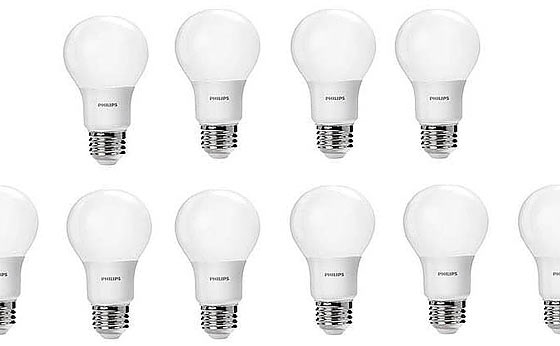 LED lights / LED light bulbs will save a significant amount of money on your electric bill because they use just a fraction of the energy compared with traditional ‘incandescent’ light bulbs.

More and more people are switching out their old light bulbs with LED lights as the prices have dropped significantly.

The most common incandescent light bulb (‘tungsten’ filament) is 60 watts.

Most people (especially ‘old timers’) have a pretty good idea how much light is put out by a 60 watt light bulb. We instinctively know the brightness and color of these bulbs due to having used them for so long.

However we need to understand a few new terms.
The first of which is ‘lumens’.

LED bulbs rated in Lumens rather than Watts

The brightness level of today’s LED light bulbs are rated in Lumens (rather than watts) because lumens actually quantify the brightness of the bulb (whereas ‘watts’ just represents the energy consumption – not the light output).

For example, the amount of light (brightness) equivalent to the old 60 watt incandescent light bulb is 800 lumens. So when looking for a LED bulb to replace your old 60 watt bulb, look for 800 lumens on the package.

According to Energy.gov and design parameters with bulb manufacturers, here are the following equivalents:

For example, to achieve a similar color appearance to that of a “warm” incandescent bulb, look for the following label specification on the LED bulb package: ‘2700 K’

Some LED bulbs are dimmable (noted on the label) while others are not, so check your needs.

Note: A dimmable LED bulb will work just fine without a dimmer.

Also, dimmable LED bulbs require a dimmer that’s designed for LED bulbs. You may have to replace your old style dimmer.

Note: For the sake of cost comparison I am going to use a cost of 20-cents per kilowatt hour, which is probably fairly realistic if you include all of the ‘fees’ that are added with your typical electric usage on your bill.

The energy consumption of LED light bulbs is remarkably less than incandescent bulbs.

For example, a 60 watt incandescent light bulb consumes 60 watts of energy.
The equivalent 800 lumen LED bulb will only consume about 8 watts!

That’s just 13 percent the energy of your old bulb, or 87 percent energy savings!

Wow. That’s a lot of saved money on your electric utility bill, especially if you convert your whole house.

The number of light bulbs typically turned on at any one time in a home will vary widely. This will depend on the home’s size, the number of people living there, and the energy consciousness of the people themselves. This makes it somewhat difficult to come up with a firm representative cost savings figure for comparison, however we can hypothesize a few examples:

If a home has ten 60 watt incandescent bulbs turned on for 6 hours a day:

It will cost about 21 dollars a month for electricity.

If that same home converts to LED bulbs, the monthly electricity cost will reduce to about 3 dollars, a savings of 18 dollars a month, or 216 dollars a year!

It is likely quite common for a typical home to have turned on, on average, more than 10 light bulbs during the evening or night (or early morning). So as you can see, the cost savings potential is quite high if you convert to LED light bulbs.

Note: If you are considering a solar power alternative energy source for your home, converting to LED bulbs is almost ‘a must’.
I converted my entire home with all LED bulbs when I installed my solar powered off-grid system and it has made a huge difference in energy consumption.

I also replaced my outdoor motion light floods with LED flood lights.
Here’s an article that I wrote about it:
The Best LED Flood Light For Outdoor Motion Light

These are the LED Flood Lights that I’m using in my outdoor motion lights:
Hyperikon 1220 lumens Flood Light Bulb

PREPAREDNESS TIP
For ‘EMP’ preparedness, keep some of your old incandescent bulbs (or some LED bulbs in a Faraday Cage), just in case. Although there will be much worse problems resulting from EMP and resulting probable grid-down scenario, there is also a chance that semiconductor junctions within a LED bulb may be damaged (along with all your other electronics). This really only is relevant if you have an alternative energy source backup protected by Faraday cage. Something to think about if that sort of thing concerns you…

A FEW RECOMMENDATIONS
The least expensive LED bulbs that I have found (so far),
Philips LED Non-Dimmable, 800-Lumen, (60-Watt Equivalent)

The best dimmable LED bulbs that will not ‘buzz’ when dimmed,
Cree Dimmable (60-Watt Equivalent)