Many of you may not even know where the nuclear power plants are located here in the U.S., and as a result you may not understand the associated risk if one of these plants suffers a nuclear meltdown.

Here are a few maps which show some of the geographical vulnerabilities of nuclear plants compared with floods, earthquakes, and dam failures.

Many nuclear reactors are built within flood zones. 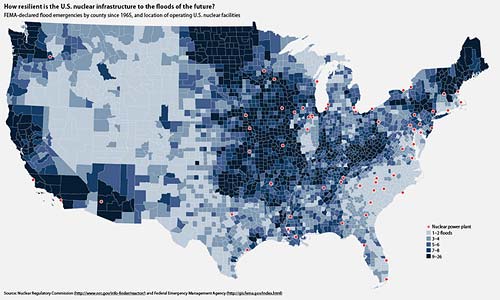 Many nuclear reactors are built within or near earthquake zones.

Many nuclear reactors are built near previous dam failures.

What can you do about it? Being AWARE is the first step towards risk assessment and preparedness actions that may result.

It is always a good idea to have a pre-planned evacuation route (several routes – just in case).

KNOW WHERE YOU WOULD GO.

Have a bug out bag at the ready (with at least 72-hours of food to get you where you’re going).

If the disaster is major, then you may not be returning any time soon (if at all)… so think about that.

There are LOTS of things to consider when you’re planning for a bug-out that involves the notion of not returning… What should you take? Keep copies of? What things are important? What if you only had minutes or an hour to evacuate? Where will you go? How much space in your vehicle to fit ‘things’? What things?

DO YOU HAVE A PLAN?