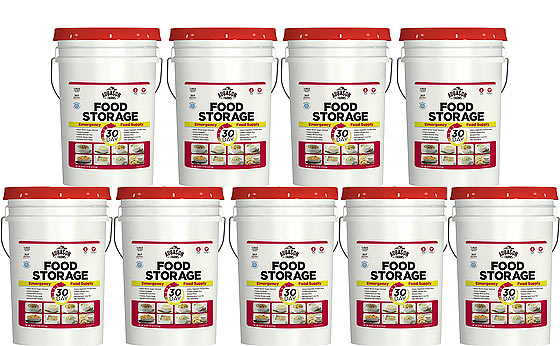 This morning while reading an article/interview between Jim Sinclair and Greg Hunter regarding the ‘pressure cooker’ financial/economic time bomb of our current system and how it’s going to blow one day, they were talking about the value of having some gold and silver as a ‘savings account’ for one’s extra wealth (no counter-party risk compared to ‘fiat’ paper money).

I read a subsequent comment saying “Those of us who do not have the means to buy gold we had better be ready with our basics of food water and shelter for when it blows.”

Greg responded by saying “Don’t underestimate the value of food and water”.

While most might say that the statement sounds like a ‘no-brainer’, and of course food and water is important, the thing is is this… It really is so very true to the core!

Here’s what I mean:

While gold and silver are truly a store of wealth (they’ve been considered ‘money’ for thousands of years around the globe), and while that statement is indeed true, the concept got me to thinking about how preppers also consider their material ‘preps’ to be stores of wealth too (and how they may be underestimating the value of food and water).

While many of these ‘things’ hold their own practical value (depending on the circumstances), survival itself always comes back to the basics. Food and Water! I tend to think that even preppers may be unprepared (more unprepared than they think) in this regard. There may be plenty of “bullets and bandaids”, but is there really an adequate food and water plan?

2. 90% of people have just 3 days of food in their home. Why? Because they believe that food will always be plentifully available. The percentage is debatable, but it’s certainly the vast, vast majority. Even our own government (FEMA) says we only need 3 days of food in the house.

3. 84% of preppers will run out food before year 1 of collapse. Most will not make it much beyond their first garden harvest. Those who do – will probably not make it much longer due to insufficient caloric production from their gardens.

source: How Much Food Storage Do You Have?

While the prepper food storage statistics above are certainly fantastic compared with most of the 90%, NONE of the other preps that have been accumulated will matter if one is starving to death or thirsting to death… The value of food and water will become enormous.

If there is NOT a sudden financial/economic collapse, but instead another ‘great depression’ or ‘greater depression’, the value of food will still become enormous.

Look at what has been going on, and is going on, in Venezuela right now. This is a tiny microcosm of what will happen if and when our current debt-burdened system finally blows up. When it does, we along with the rest of the ‘modern’ world will all go down together. And it will be orders of magnitude greater than what we’re seeing now in Venezuela.

Food and Water will be the commodity that matters.
You might re-check your storage…

Note: Even if it doesn’t ‘blow up’ (although I cannot imagine how it will not eventually), you can eat your excess food. It is still a good investment (a much better return than money in the bank – which essentially has no return).

Note: While in the mindset of acquiring other so called ‘preps’, take a hard look at your food and water plan. Break the ‘normalcy bias’ mindset of readily available food and water. Figure out what you might do if and when you run out of your current food storage.