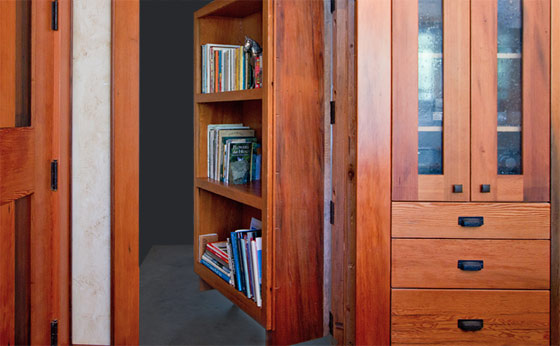 Although a solid food storage inventory is becoming slightly more ‘mainstream’ (more people are realizing the benefits to having more than just a few weeks of food), when some people discover that you store more than just several weeks worth of food, or have a food storage inventory beyond what most people consider to be ‘normal’, they tend to look at you in a different way. I would dare say that some of them will think you’re a bit ‘nuts’. This is an unfortunate reality (their misconception), and one which will be difficult to change in a modern society in which food is plentiful – where people cannot understand your motivations.

That said, if you’re a preparedness-minded individual or family who has a food storage of say, 3-months, or more, you might want to consider the potential risks (and stigmas) associated with others knowing about it. Perhaps you’ll want to hide it.

UPDATED for your new comments and opinion…

Will others think you’re ‘nuts’ for having food storage?

When people observe the behavior of others, and if that behavior does not fit within their own sense of what’s normal, then the other person is labeled as ‘different’ or odd. That’s just normal human reaction for most. Since most people have no idea of the potentially serious risks that we face – many of which could compromise our easy availability to food – they therefore cannot understand your motivation for food storage beyond their own ‘normal’.

Additional reasons (for others believing you’re ‘nuts’) include the mainstream media who have successfully stereotyped preppers as a bunch of oddball kook’s. Many ‘sheeple’ people therefore look upon the notion of prepping and preparedness-minded people as weird – thanks to TV-shows negatively portraying the most extreme of the bunch and the consistent misleading messaging. Although like I said, I do perceive and believe that this is slowly changing (the misconception).

While there are plenty of folks who would not consider a plentiful food storage to be abnormal, the fact is that ‘most’ sheeple people will not understand you and your reasons. Therefore, you are cautioned to consider that fact as you go about your daily life.

It is a natural instinct for most humans to impress others or boast about their accomplishments. However boasting to others rarely will do you any good in any real way. Often, it is done only to make you feel better about yourself. Even to validate what you’ve done, as though you were unsure to begin with… Or maybe it has to do with keeping up with the Joneses.

On the other hand, you might find it refreshing to ‘play down’ or de-emphasize (be humble) about one’s own successes, and even hide some of them from others. Live ‘under the radar’, not drawing attention to yourself. It’s actually liberating in a way…

So – having said that, it is true that loose lips sink ships because people will remember the exceptional or outrageous things that you say (as interpreted in their own minds), and these things may one day come around and bite you in the arss. In other words, keep your mouth shut…

Do I need to hide my food storage?

You’ve heard the saying, “Out of sight, out of mind”. What good will it do for you if you leave your food storage in plain sight for others to notice? Answer: None whatsoever.

Knowing the way that many people will think about it should motivate you to keep it under the radar. Showing it off is only bragging – asking for trouble.

Here’s the thing… IF we ever experience a situation or period of time in which we will actually need to draw down our food storage resources due to disaster or collapse, you will be in a very minority group of people who actually have the luxury of such food storage. Think about that.

You’ve heard this saying too, “Desperate people do desperate things.” so why enable a potential desperate act by allowing others to know what you have?

During such a collapse scenario, terrible decisions will have to be made and life will be cruel. If you decide to share your food with others, that will be your own personal decision – but should not be a decision that others make for you.

The cold hard fact is that under certain conditions, others WILL take it.

There are laws in place to confiscate your food storage.

One plan for confiscation (under certain ‘national security’ conditions) is contained within the “War And National Defense Production Act Of 1950”.

In order to prevent hoarding, no person shall accumulate (1) in excess of the reasonable demands of business, personal, or home consumption, or (2) for the purpose of resale at prices in excess of prevailing market prices, materials which have been designated by the President as scarce materials or materials the supply of which would be threatened by such accumulation. The President shall order published in the Federal Register, and in such other manner as he may deem appropriate, every designation of materials the accumulation of which is unlawful and any withdrawal of such designation.

Translation: The President can simply decide what is ‘reasonable’ and then order an impound on the excess (for ‘fair’ redistribution – and/or to themselves).

Another way (to confiscate your food storage) is within the recent Executive Order (EO 13603),
National Defense Resources Preparedness, signed by President Barrack Obama during 2012.

Translation: The government can ‘go all the way’ if it wants to, and seize any resource – including your food storage at home (if it ever comes to that degree of collapse).

While it is nearly unthinkable that we would ever (really) enter a time in which collapse and desperation create widespread hunger among us, the fact is that it certainly is possible (have you really examined the ‘real’ economy lately, and the gargantuan debt that the nation and world is in? – as just one example…).

Whatever food storage that you have accumulated should be considered a precious and possibly secret asset, only revealed to whom you choose.

You might consider methods to hide some of your food storage from prying eyes. Maybe you store your excess food storage in different areas, different places. Cover it. Be creative. Here’s an idea – build a false wall with a secret door ;)

Isn’t it sad that we even have to talk about food storage like this?
This is reality. This is operational security.