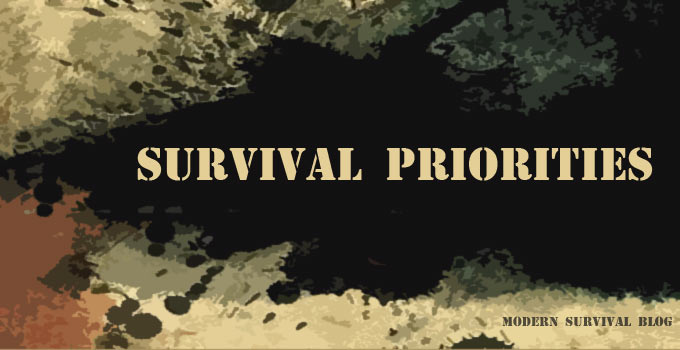 Prioritizing one’s survival priorities while in an emergency situation. When it comes to survival, every emergency or crisis is unique. The setting, the weather, the people, and the events combine to create its own unique occurrence. However with that said, there are a few constants. For example, the cold can kill you faster than dehydration. A lack of water can kill you faster than starvation. And a panicked decision can get you killed immediately.

Whether you are planning for, or actually going through an emergency or disaster, consider the following information about one’s survival priorities.

First, I will mention the “rule of threes”. A human might only survive for:

That’s great to know, and helps with decision making. However, lets take it a step further than that. Originally, the U.S. Air Force came up with the following list of 7 survival priorities. This list is often referenced within the context of wilderness survival.

Beginning with, and keeping a positive attitude that includes the ability to adapt, to think clearly. One’s immediate assessment, decisions and subsequent actions are foremost.

With mental toughness, you can tolerate hard conditions better and do what needs to be done.

To the best of your ability, stay positive, be tough, avoid panic, work hard and take care of the worst problem first.

Chances are that if you’re with other people during the emergency or crisis, many of them may panic, babble, and they will tend to make bad decisions. What’s worse is that others will be affected by it too. Panic can be contagious. And stupid decisions from a loudmouth can lead to further disastrous results. Be aware of this. Take charge if you can. Or, don’t follow the crowd if they’re being stupid…

During an emergency situation, asses the situation and mitigate any of the following:

– Food. Maintain caloric energy to keep going.
– Transportation. To safety. Under your own power or other means.
– Operational Security & Defense If the situation warrants. 2 or 4 legged.
– Sleep. Without sleep, decision making abilities will deteriorate.

One Version Of The Rule of Threes

I wrote about it (here)

Someone on the blog once posted the following:

Survival Priority Lesson learned from the Corps and my current job as a Fire/Medic:

Hopefully these thoughts and lists of survival priorities will help some of you. It’s good to have this in your head, just in case you’re hurled into an emergency situation or crisis.