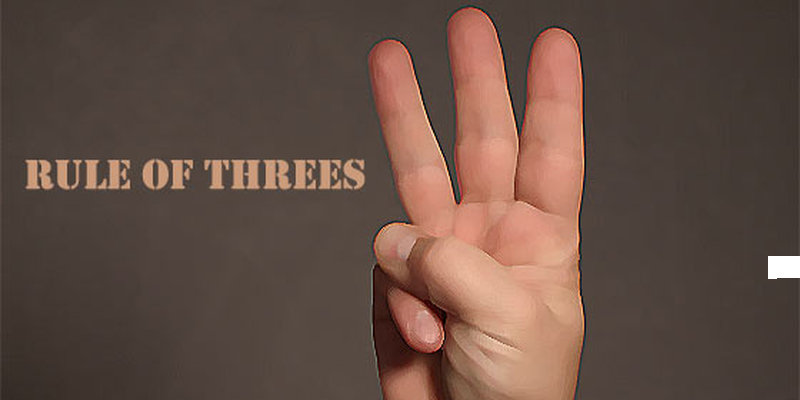 Knowing and adapting to the rule of three for survival. It could make the difference between life and death when making critical decisions in an environment of potential or actual disaster.

The Rule Of Threes is a way to help remember a set of priorities to sustain life.

Here’s what I mean, and these are accepted generalities. However they are close enough to get the point across…

Likely and generally, at most you can only survive for:

The reason for the Rule of threes? It’s to help focus on the most immediate problem first. And to simply understand the realities. Keep reading…

Rule of Three’s – For Survival

The survival rule of 3’s are commonly referenced in the context of outdoor/wilderness survival. However it really doesn’t matter the situation, or where it happens… The priorities are relevant, regardless.

Example: If your immediate threat to survival is hypothermia, there’s no need to think about how you’re going to get food or water. Because if you’re wet, cold, and shivering, you are going to be out of commission in several (~3) hours or less without mitigation. Maybe even dead…

Generally speaking, you can only survive for…

Someone who is not breathing has only minutes… So, logically, it is priority #1. (Although I mention another priority below, which could supersede this one, depending on circumstances. Security.)

I’ve read that most people can hold their breath approximately 30 seconds, up to 2 minutes if you are in excellent health.

You have to breathe for survival. Your body needs air / oxygen. Additionally, breathing clears the carbon dioxide (CO₂) that’s building up in your blood.

How Long Can the Brain Go Without Oxygen? A Timeline

Any situation that impedes breathing (or the blood’s ability to circulate Oxygen) is an immediate threat to survival.

An example of this risk are those who may have severe asthma, or allergic reactions. This could be life threatening without an inhaler or epinephrine. Consider a near-drowning incident. Do you know how to attempt clearing the lungs of a victim who has swallowed water so that they can breath? Another example may be someone choking on food. This is another life threatening situation with only minutes to survive.

Shelter. Protection from the elements. Your clothes count too.

This rule of three gives you about 3 hours if your body core temperature is unsafe beyond thresholds to regulate. Too cold, or too hot. When analyzing deaths of persons lost in the wilderness, most lose their life due to hypothermia (cold).

To maintain this temperature without the help of warming or cooling devices, the surrounding environment needs to be at about 82˚F (28˚C).

Clothes aren’t just for looks — they’re necessary to keep warm. You can usually bundle up in more layers during colder months, and you can use fans or air conditioners in warmer months to maintain a healthy core temperature.

Wet and Cold. Those are two very bad things together. Quite potentially becoming deadly. Seeking shelter / protection from the cold, wind, and wet, can become extremely important in a survival situation.

When your body core temperature drops, your heart, nervous system and other organs can’t work normally. Left untreated, hypothermia can lead to complete failure of your heart and respiratory system and eventually to death.

Signs and symptoms of hypothermia include:

Plan for changing environmental conditions on any excursion. Pack for it. I live in the mountains. I can attest to the potential radical differences in temperature and changing weather conditions simply based on elevation and location. Experienced hikers ‘get this’. However, many others do not.

Staying dry is so very important. Do you have the right clothing with you or on you? Got enough layers? What about rain gear? Got an extra pair of dry socks? (for example). Do you have the ability and gear to make a temporary shelter? A way to make a fire?

[ Read: Hypothermia – How To Prevent It ]

Another really important rule of three! Generally, you might only survive for about three days without any water whatsoever. Maybe a few more if you’re lucky.

Without enough water, the kidneys use more energy and wear on tissue. Your kidneys need to function adequately to flush out waste from your blood. Eventually, your kidneys will cease to function without adequate water intake.

Some of the side effects without enough water:

You must stay hydrated. The second leading cause of lost persons death in the wilderness is dehydration. No water to drink. Not being prepared with enough water.

Water is a valuable survival commodity! Always treat suspect water before drinking it. And treat all water as suspect! Got a drinking water filter?

Being dehydrated hinders the ability of your body to maintain core temperature.

Tip: Don’t eat snow. Only do this as a last resort. The cold snow will lower your body core temperature.

Few short term survival situations require food. Why? Because the human body can survive for weeks without food. We are somewhat inherently adapted to short periods of fasting (starvation). The rule of threes here is approximately 3 weeks.

A “rule of thumb” appears to be (generally) three weeks.

Some of the side effects of starvation include:

Given that we can survive for a time without food, consider your other priorities first, as well as efforts to get out of the situation (and/or rescue).

On the other hand, if your situation appears to be long-term, then yes you will need to somehow acquire food.

One thing though… Without enough calories you will quickly become increasingly unable to help yourself out of the situation. Energy stores will deplete. Try going without food for a day… It’s not fun. Now imagine days, and days… desperation will set in for sure.

With that said, you might say that AIR, SHELTER, WATER, FOOD, is the proper priority order for survivability.

Depending on the situation, circumstance, or environment, you might also insert SECURITY as #1 (before AIR) when there is an immediate threat to life. You might say the rule of three for security is 3 seconds…depending…

You might also add the concept of ATTITUDE. A positive attitude to help overcome a stressful situation, and making the right decisions.

Here’s another rule of three… Someone on the blog said “3 people cannot keep a secret”. Another said “3 seconds without common sense or thinking.”