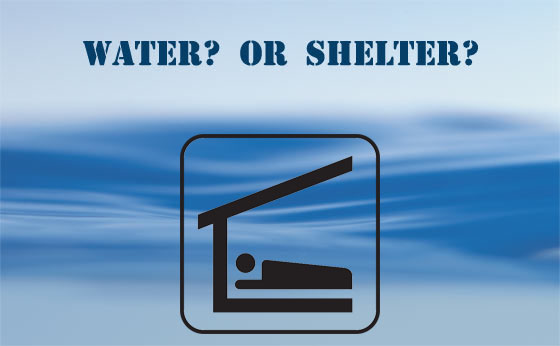 Survival priorities. What comes first, next, and so on.

Many of you know the rule of three:

The Rule of Threes

Aside from air (ability to breathe), I’ve heard this question debated: “What’s a higher priority when it comes to survival – Water, or Shelter?”

It could be either Water OR Shelter – depending on the environment. They’re both very important.

To say that water is priority 1 – is wrong (sometimes).

Saying that shelter is priority 1 – is also wrong (sometimes).

Maintaining a safe body core temperature is critical for survival. Shelter may become your number one priority when you’re in an environment where hypothermia may become an issue. If you’re prepared for that, then priorities shift.

You can survive days without water, but severe hypothermia could take your life in hours. Clothes, outerwear, protection from the elements, literal shelter. They all attribute to the survival category of ‘shelter’.

How to Prevent Hypothermia

Similarly under the shelter priority, an environment of excessive heat could become life threatening.

Shelter (protection from the sun, shelter from the heat) would be a priority in the circumstance of extreme heat. Though water (hydration) factors in too…

Water (hydration) may be your #1 priority when you haven’t had any in awhile!

Normally throughout any given day we consume water (liquids) in various ways. There’s water in our food. The variety of beverages that we drink each day.

The survival ‘rule of thumb’ is three days without any liquids, and you might die. That statement may seem unreal. Sometimes we hear of a survival situation where a person survived a few days longer than that. However that’s the exception to the rule. You’re only looking at days of survival without any water whatsoever!

Your body is constantly evaporating and exhaling moisture. When it’s not replenished, your health will deteriorate rapidly!

Not only is water a top priority, but SAFE drinking water is the more accurate way of saying it.. Contaminated water will cause rapid dehydration (resulting from being sick). Safe clean drinking water. Boiling it. Filtering it.

Can Other Survival Priorities Be #1?

Sure, yes! A few examples:

I could also throw a wrench into the works and say that security may be priority #1. There could be a circumstance where your life is put in danger whereby priority #1 becomes evasion, or defensive (or offensive) tactics. Priorities can change quickly!

Another example might be safety. Your vehicle skidded off the road into brush and trees. You’re trapped inside until someone notices because the doors won’t open. Now your priority is getting the attention of another human being to help you!

You’re hiking (although it could happen anywhere). You stumble, twist your ankle and fall to the ground landing on your arm – which fractures. Now you need First Aid! New priority…

The thing is, survival priority #1 depends on your present circumstance, and could easily change from one moment to the next. You need to be prepared and able to adapt and overcome.

Generally speaking – Instead of saying just water or shelter, I’ll suggest this: Bear in mind all of these top level general categories together – for survival:

If you have them all covered to the extent that you can, then you’re going to be prepared for many circumstances.

Back to the topic – How do you prepare for water and shelter?

Bring water with you. Know where there’s water. How to find water. Have a container and the ability to collect and purify it (fire, filter, chemical treatment).

Think of shelter as anything and everything that protects your body and skin from the elements, anytime of the day or night. This includes your clothes, outerwear, as well as traditional means of sheltering. Have a means (on your person) to make fire to overcome hypothermia. Have the basics and know-how to make shelter.

If I was forced to choose between water or shelter category as official priority, I would have to say shelter – only because under worst case scenarios it is theoretically possible to lose your life quicker due to body core temperature than from lack of hydration.

With that said there are even quicker ways to lose it, but we’re only talking about water and shelter (grin)…