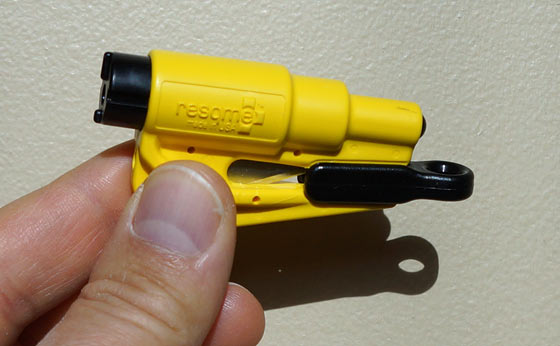 The ” RESQUME ” tool (window breaker) comes with a built-in seat belt cutter. It’s something to consider keeping in your vehicle (or on your keychain). I keep one in my truck in case of an emergency — to quickly shatter and break a window to escape.

( see image below where I keep it inside the vehicle )

The resqme tool has a built-in blade to cut a jammed seat-belt — in the event of becoming trapped in your vehicle. It also has a spring-loaded spike to shatter a vehicle’s window with a simple “press”.

I bought one of these to keep in my truck for an emergency, just in case. Not only could this tool potentially help me escape being trapped, but it could be used to help rescue others.

The resqme tool is designed to help you escape quickly from a vehicle following a car crash or if sinking in water. Here’s an article I wrote awhile back:

The window breaker is a spring-loaded center punch with a spike that is activated when you push the head of the tool against a window. You can test it or try it out by pressing it against a piece of wood (warning: it will leave a mark!). You will notice when you press hard enough, the internal spike ‘snaps’, leaving a dent where the spike was released.

The mechanism resets itself automatically so you can use it again in an emergency. It cannot accidentally ‘go off’ because it requires 12-pounds of pressure while pushing against a surface in order to ‘arm’ the spring and trigger the center punch. 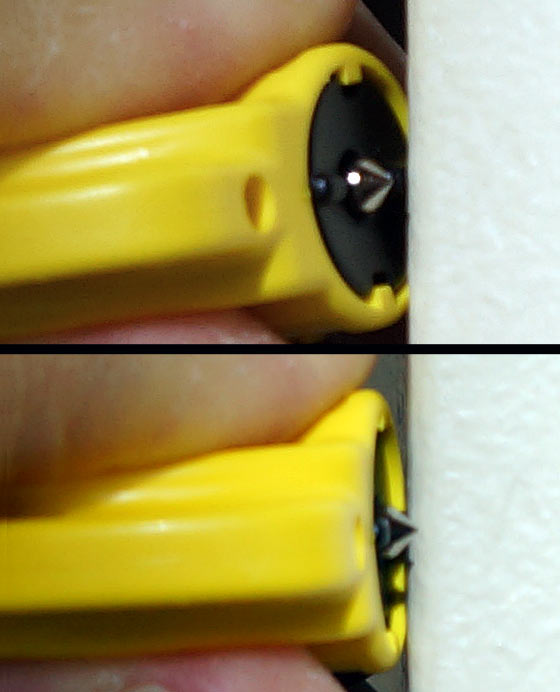 I am pressing the resqme and holding against the edge of a wall-corner, to show the spike

The seat belt cutter portion is a razor sharp blade mounted in a groove to enable you to quickly slice through the seat-belt material. The blade is protected by a clip which snaps tightly into the tool. The clip has a hole in it which cab be used to attach to a key ring.

I did not want to carry this on my keychain. So I tied a small length of paracord to hold the resqme tool to the gear shift lever. That way it will ALWAYS be accessible if I need it in the vehicle. 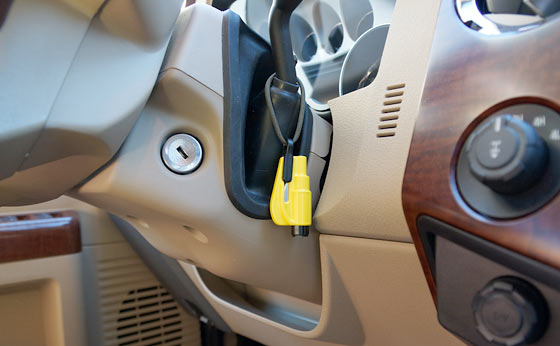 resqme The Original Keychain Car Escape Tool, Made in USA
(view on amzn)