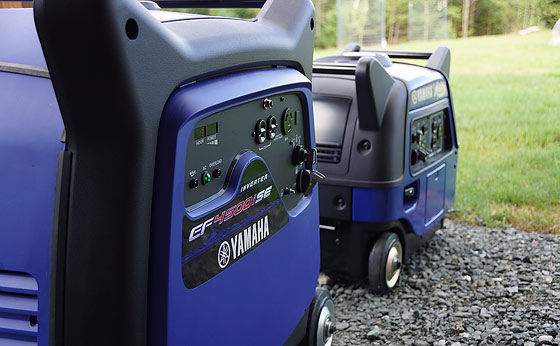 Verify Your Portable Generator Works, BEFORE You Ever Need It!

Every once in a while it’s a good idea to run your generator!

I am updating this post with more maintenance tips, given the time of year as hurricane season gets going! (Though you should do this regardless!)

This is a reminder to do your due-diligence (I just did). Drag your portable generator out of the garage or wherever it is, and start it up.

Ladies and Gentlemen, Start your generators!

Generator maintenance at a minimum, involves simply running your generator from time to time. Why?

How Often To Run Your Generator

I try to run my generators every 3 months or thereabouts. Even better if you operate it once a month. Sometimes I forget, but if you run it at least several times a year, that’s better than nothing!

Seriously, You really should do this at least twice a year.

How Long To Run Your Generator

I let my portable generators run for about 20 minutes. Long enough for it to reach operating temperature. This is important. Don’t just run it for a few minutes…

When you’re just about done running the generator, shut off the fuel line and let it run dry until the generator stalls out. This will consume the fuel from the carburetor so it doesn’t sit there and potentially gum up over time. If you forget, this will likely become a problem for the generator not starting – after it gums up.

Gasoline is formulated to be optimum for only 1 – 3 months. After that, gasoline molecules react with each other and will eventually become sticky varnish that can clog fuel filters, fuel lines, and carburetor jets.

If you have a tank of gasoline (or jugs of gas) that have sitting around for many months, the gasoline may cause problems with the fuel delivery system. It might prevent proper operation of the engine. This is particularly true with portable generators because they often sit unused for quite some time.

Remember to shut off the fuel valve while the generator is still running, and let the generator run itself out from fuel starvation (which will probably take a minute or thereabouts). Since the fuel shutoff valve isolates the gas tank from the carburetor, once the generator uses up that remaining fuel, you will know that the delivery system and carburetor is cleared of all fuel — nothing left to gum up the works over time.

A way to increase fuel shelf life: Gasoline fuel stabilizer / additive. It will extend fuel life up to a year or more. This will also inhibit the fuel from gumming up inside the carburetor when it’s sitting idle in your generator. There are two commonly used fuel stabilizers, both of which work well.

When able to do so, use ethanol-free gasoline for your generator! Highly recommended. This will greatly help reduce chances of gumming up the works  (online search for stations near you). Say goodbye to old gas issues. I use ethanol-free gasoline for all of my small engines here at the homestead. This gas will “stay good” for a LOT longer. So, if you find a place near you that sells it, then that’s where you should fill your gas cans!

Check the oil before you start it.

This is a primary reason why people inadvertently destroy their generators! If you run the generator out of oil, it will destroy it! Some have auto-shut off’s if the oil gets low. However there are MANY generators that will not shut off when the oil runs low. Especially the lesser expensive models.

Run the generator under load, and check the outlets for power.

Check the generator outlets for power while it’s running. Don’t assume that there’s actually electricity at the outlets, in case something’s wrong. Plug in a decent load. A hair dryer? Whatever, just load it up and check the outlets.

Note: Disconnect the load prior to starting, and prior to stopping. Load only while running.

A major problem with long term storage of a generator (besides the fuel deterioration) is corrosion of the engine and generator bearings when the lubricating oil becomes stagnant around the bearings.

As a preventative measure, run the generator every 90 days for the lubricating oil to get mixed up in there – and the bearing surfaces coated with oil.

It’s also a good idea to trickle charge that battery once in awhile. I’ve lost a battery because of this. Whoops.

Run the generator until it’s Hot

It is also a good idea to operate the generator engine at least until is reaches normal operating temperature. Water is created during the combustion process. When a generator is started and then shut down while the engine is still cold, the moisture remains in the cylinder and valve areas. This promotes corrosion. If the engine is warm when it is shut down, most of the moisture evaporates before the engine cools down.

[ Read: The right Extension Cord for your Generator ]