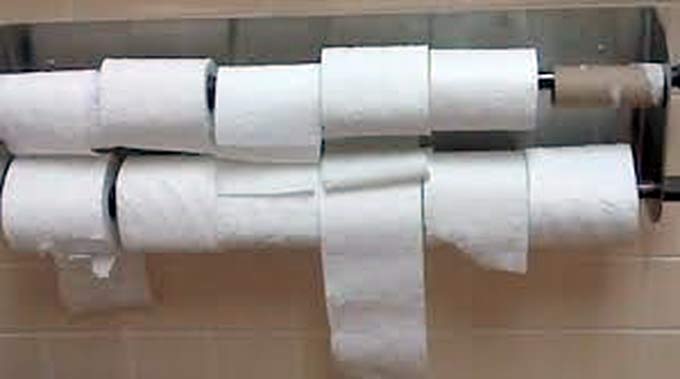 Toilet paper is one of NRP’s favorite subjects to discuss and joke about here on MSB. I have been waiting for this day when he finally submitted a guest article about this topic. He is the resident expert on this. So, buckle in, here we go…

But first, a note about the image shown above, which is perhaps The Best Toilet Paper Holder ever. At least it is at NRP’s house! Hilarious!

Ok; you all knew this Article was coming so stop rolling your eyes!

Related: How Many Rolls Of TP Do You Use Every Week?

The first recorded use of toilet paper was in 6th Century China. By the 14th Century, the Chinese government was mass-producing it. Ya gata LOVE the Chinese.

Packaged toilet paper wasn’t sold in the United States until 1857. Joseph Gayetty, the man who introduced packaged TP to the U.S., had his name printed on every sheet.

It wasn’t until 1935 that a manufacturer was able to promise “Splinter-Free Toilet Paper.” OUCH!!!!!

Seven percent of Americans admit to stealing rolls of toilet paper in hotels.

Historically, what you use to wipe depended on your income level. In the middle ages, they used something called a “gompf stick” which was just an actual stick used to scrape. Wealthy Romans used wool soaked in rose water and French royalty used lace.

70-75% of the world still doesn’t use toilet paper because it is too expensive or there is not sufficient plumbing. In many Western European countries, bidets are seen as more effective and preferable to toilet paper.

The reason it disintegrates so quickly when wet is that the fibers used to make it are very short.

There was a toilet paper museum in Wisconsin, The Madison Museum of Bathroom Tissue, but it closed in 2000. The museum once had over 3,000 rolls of TP from places all over the world, including The Guggenheim, Ellis Island, and Graceland.

If you hang your toilet paper so you can pull it from the bottom, you’re considered more intelligent than someone who pulls it from the top. 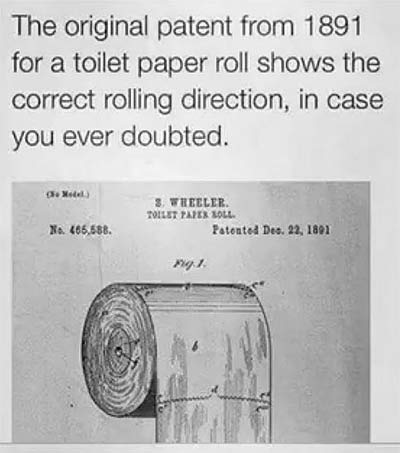 When asked what necessity they would bring to a desert island, 49% of people said toilet paper before food. HAHAHA, gata love those Desert Island People.

Ok, how about some uses?

Number Two – it had to be said
Number One – yep, that too

Cleaning up after your dog, WAIT!!! Train the dog to go OUTSIDE. Killing/cleaning up bugs

Stuff your bra…Hummmm, is that not cheating?

Make a temporary bandage, ever have a bloody nose?

During Desert Storm, the U.S. Army used toilet paper to camouflage their tanks.

On the International Space Station, they still use regular toilet paper but it has to be sealed in special containers and compressed.

Ya ever grab the end of a roll and pull it hard expecting it to tear off and you end up with 6 feet of the stuff on the floor? I know I have HAHAHA, and don’t lie, you have too….

Ok, how about most popular 10 Brands?

From Amazon, the largest Retailer in the world, as of this post date:

Most expensive; Renova 3 Ply Soft Colour Toilet Loo Bathroom Tissue Paper Rolls 6 Pack for $16.49 on Amazon. Really? $2.75 for a roll of TP, some people have wayyyy to much money.

AND for those political hacks out there;

Can ya see where the country would be headed with Clinton as Pres? LOL

SO; that’s it for this old farts TP fun and info, except for a little commentary.

Those that follow this Blog much know I like to tease and joke quite a bit about TP, the reason I do this is to add a little humor into the preparing of what may come. If someone can laugh a little bit and remember to pick up a little extra of this and that when they laugh at seeing TP in the store (and think of MSB and all of Ken’s work convincing and showing people how to prepare for TSHTF), well then, that’s what it’s all about, being prepared for those little mishaps AND the Biggins when they hit, and they WILL hit sooner or later.

In 1973 Johnny Carson caused a toilet paper shortage. He said as a joke that there was a shortage, which there wasn’t, until everyone believed him and ran out to buy up the supply. It took three weeks for some stores to get more stock.

Are you ready for the ‘Great American TP Shortage’? Do you really want the Wife and Ladies of the house to run out of TP?